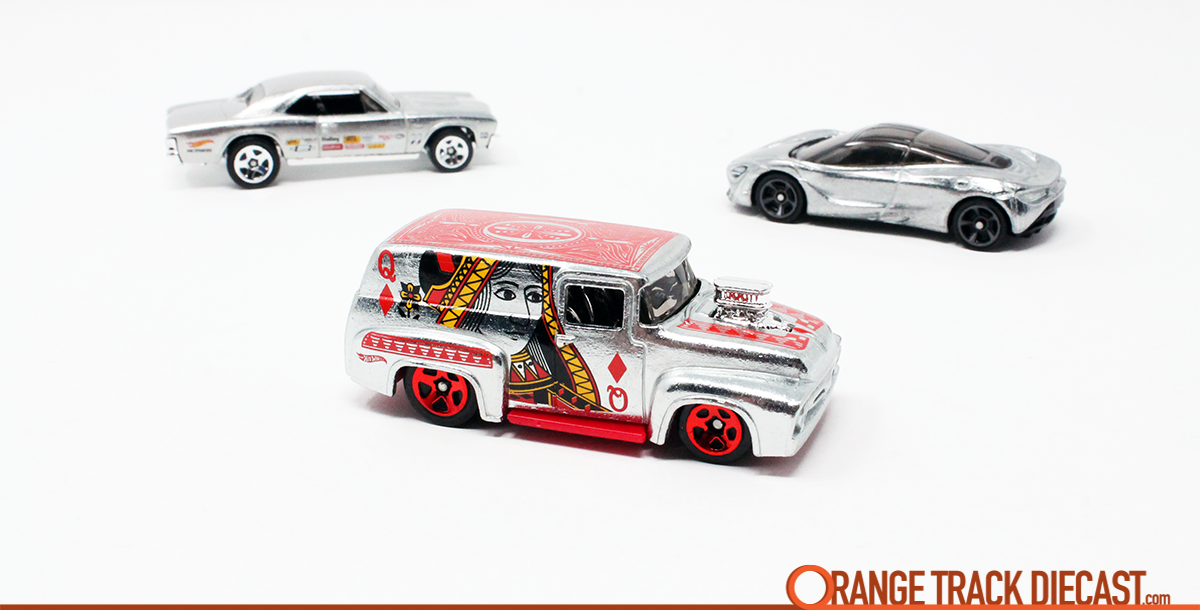 First off, the Hot Wheels #’56 Ford F-100 casting made its debut in the #1999 First Editions. It was a #Phil Riehlman Design that featured a flip-up nose. It was originally released as the ’56 Ford, but ambiguity got the best of this casting’s name so don’t be surprised if you see it as ’56 Ford Truck or ’56 Ford Panel. For years, the ’56 Ford was one of the more popular Hot Wheels castings with collectors. It was common to see it used across multiple lines, and several times a year. In 2007, Hot Wheels released the #Custom ’56 Ford F-100 which is a pickup version of this casting. Nowadays, the ’56 Ford has taken a backseat to that pickup version of the casting as there haven’t been as many releases of it. These 2019 #HW Art Cars #Variations are actually the first time the casting has been used since 2014.

What makes this #HW Art Cars release so cool that it deserves its own #Showcase? The graphics. Let me just go on the record and say that I enjoyed the #Checkmate cars from 2018 — if I haven’t already confirmed that. Theming deco around a classic game like chess was a great start. I feel like these #’56 Ford F-100s take off where those Checkmate cars left off — combing Hot Wheels with the art that serves as the basis for hundreds, if not thousands of games worldwide: playing cards.

It is unclear which came first, the casting or the deco as we (as collectors) aren’t privy to the mainline casting selection process. With that said, the #’56 Ford F-100 seems like it was the perfect choice for the graphics designed by Hot Wheels Graphic Designer, Jerry Thienprasiddhi. The Queen “face card” adorns that large face known as the sides of the ’56 Ford. On top is a back of a playing card, with a subtle “O” on the inside for the annual, “What do all the #HW Art Cars spell?”

The white colorway of the #HW Art Cars #’56 Ford F-100 came out as part of the #2019 Hot Wheels “K” case assortment, which has been out for a couple months now. You’ve probably seen it on the pegs in all its Queen of Hearts glory. What is definitely a tad more elusive is the #Walmart Exclusive, #ZAMAC release, appearing in some Walmart “N” cases. Why are ZAMACs like this harder to find? Well, they are limited to one store — in this case, Walmart — and also, collectors have been scooping up ZAMACs left and right as they often value them over the standard $1 price point.

Observant collectors will notice that this bare metal release actually features the Queen of Diamonds versus the Queen of Hearts found on the white colorway. It almost makes you wish we could see the Queens of Clubs and Spades as well. Since there is no real additional play value with playing card decos — unlike the Hot Wheels #Checkmate cars which could actually be used to play chess — you have to admire the playing card graphics for what they are: ART. It’s no wonder why this deco was chosen to be part of the #HW Art Cars series. Such a cool deco on a casting that has seen plenty over its 20+ year history.