The Hot Wheels #Speed Blur series is a brand-new segment for the #2019 Hot Wheels mainline. You may have heard of the Speed Blur 5-Pack which has started to hit stores, as the Datsun Bluebird 510 Wagon included in that has piqued collector interest. This mainline series has an additional 10 cars, and each should have a pretty outlandish design courtesy of Hot Wheels graphic designer, Leeway Chang.

I reached out to Leeway the other day and asked him if he designed the graphics for all 10 cars in the #Speed Blur series — knowing that he already did all five cars in the 5-Pack — and he said, “yeah, Speed Blur is my baby”. He also went on to explain his inspiration behind the series:

Inspired by graphics and colors from car culture, art, trend, and action sports. Pushing the boundaries a bit and asymmetrical when I can.

The Hot Wheels #Track Ripper is the first casting out of the gate for the mainline #Speed Blur series and it accomplishes just that. Its “active deco” definitely looks like it pushed boundaries at the Hot Wheels plant in Malaysia as it looks like it exceeds the maximum number of tampo hits for a basic car. Its got this — what I can best describe as — “test/prototype car” deco… you know, like the crazy black and white wraps the automotive industry puts on new car designs to help deter web sites and publications from leaking final images of the car. 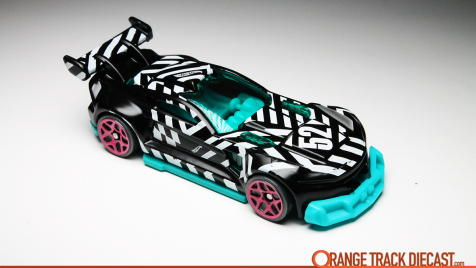 Collectors may not be entirely familiar with the #Unlicensed Hot Wheels #Track Ripper as it made its debut in 2018 in two colorways of a forgettable deco. As you can see, the #Speed Blur release is quite the opposite as I know its turned at least a few heads at the pegs within the last couple weeks. Collectors have been picking this one up, in awe of this crazy design. If you are indeed grabbing this one at the pegs as part of the #2019 Hot Wheels “B” case assortment, you’ll notice that the front chin snaps up, to increase this casting’s orange track performance (shown below).

Hot Wheels Track Ripper from the 2019 Speed Blur series (side view, chin down)

Hot Wheels Track Ripper from the 2019 Speed Blur series (side view, chin up)

This crazy, outlandish design of the Hot Wheels #Speed Blur #Track Ripper is a great way to kick off this brand-new series. So far I have seen a couple Speed Blur cars like the ’17 Nissan GT-R (R35) and the ’64 Chevy Chevelle SS and I can already tell this series is going to be a favorite of mine for 2019 — much like how I enjoyed the Nightburnerz series its first couple years.

We will have to see what else gets released as part of the 2019 #Speed Blur series as this is one of those series that I can really see collectors gravitate towards. Yes, its tampo (graphic) heavy, so if thats not your thing, you probably won’t care for it, but the rest of us are just waiting to see what kinds of designs Leeway has in store for us.