Holy Bazoomka! Yeah, the casting has a great name, but what the heck is a #Bazoomka?

The Hot Wheels #Bazoomka was introduced in 2018 as a #Casting that is compatible with Legos and, came in two colorways as part of the HW Fun Park series. This year (2019), the Bazoomka was released in the very first case assortment — the 2019 “A” case — and it is that case’s regular #Treasure Hunt. You can see the #Flame Logo (TH) behind the eye and mouth graphics in the picture below.

I brought out “Stan the Mega Bloks Man” as I do for any of these #Castings that are compatible with Mega Bloks. He was a San Diego Comic Con exclusive several years back and serves as my crash test dummy of sorts.

This #2019 Treasure Hunts #Bazoomka is segmented this year as part of the mini figure compatible series known as the #HW Ride-Ons. From a collector stand-point, obviously this #Unlicensed Hot Wheels car isn’t an ideal selection as its already received the usual disgust on social media from several groups of traditional collectors. However, as someone that is actively listening to the social conversations out there about Hot Wheels, and perusing what collectors are finding, I do see a good amount of collectors picking this one up — not only because its a #Treasure Hunt — because of the level of intrigue the casting brings in this wicked-cool graphics scheme. So that brings me to my original question: What the heck is a Bazoomka??? 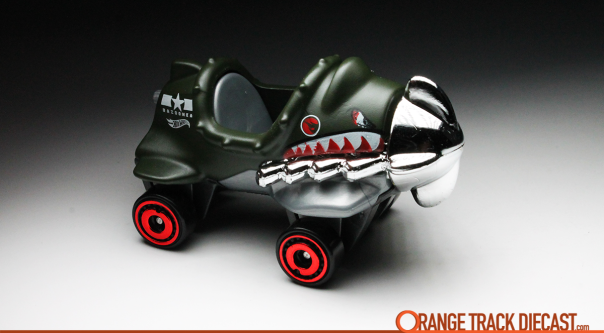 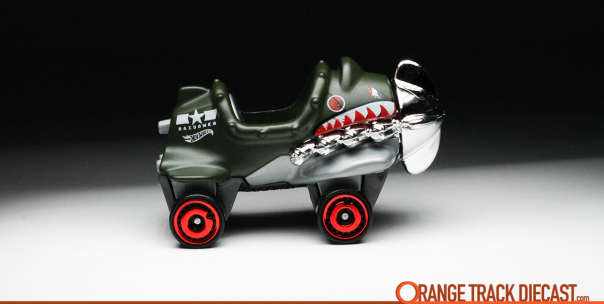 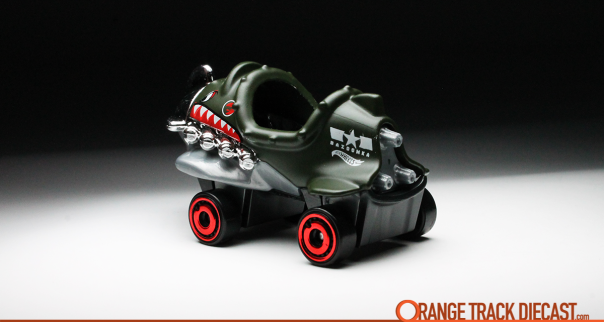 Hot Wheels Bazoomka from the 2019 HW Ride-Ons Series … also a 2019 Treasure Hunt (with figure, side view)

From the best I can tell, the Hot Wheels #Bazoomka is based off of one of those airplanes that kids ride in at a carnival. This casting was obviously given wheels to make it into a Hot Wheels car. The 2018 HW Fun Park releases of the Bazoomka came in dark red and blue respectively, and just weren’t that great. This third variant has graphics that I can certainly get behind. The body is painted a matte olive color, and the graphics are reminiscent of an old fighter plane. The chromed-out nose and red-chrome #Aero Disc Wheels are a nice touch.

While the #Bazoomka may not register on a lot of collectors’ radars as anything beyond a regular #Treasure Hunt, I can see kids really digging this casting — along with the other #HW Ride-Ons. As I kid, I remember being disappointed that there were no Hot Wheels cars to put my Lego guys in. We used to put them in the beds of Hot Wheels trucks as that was really the only place they would fit. Back then, the majority of Hot Wheels trucks weren’t compatible with Hot Wheels track so racing our mini figs only went so far. Despite not featuring HW Ride-Ons vehicles here all-too-often, I have to say that I am glad to see these in the Hot Wheels mainline as I believe kids — and you big kids 😉 — have to be getting a kick out of them. Especially ones that look this nice!