The #Meyers Manx is one of those cars that screams Southern California and more importantly (in this setting), Hot Wheels. Introduced as a #2003 First Edition the Hot Wheels Meyers Manx appeared every year from 2003 until 2014, with 2011 being the lone year without a release. However, since its 2014 release, it has been missing for three consecutive years. This little dune buggy was quite popular over its 12-year run as it was seemingly never a pegwarmer, even with multiple releases & color variants in some of those years. 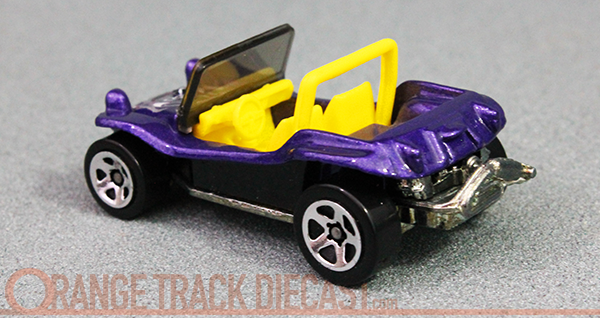 But what is a Meyers Manx? Where did it come from? Remember how I said it screams Southern California? Well, you could say it IS Southern California. Bruce Meyers, founder of Bruce F. Meyers & Co., grew up in Southern California surfing, racing cars and hanging out at Pismo Beach in the early ’60s. In ’64, the former boat builder & engineer, created the first Meyers Manx out of a fiberglass body to make it significantly lighter than other dune buggies at the time. By the early ’70s, many imitations were made and the Manx was no longer being produced. As of several years ago, the company was jumpstarted once again and began selling kits, including some new “modern re-imaginings of the classic and iconic Meyers Manx” off of its website meyersmanx.com.

So now that the 1:1 Meyers Manx kits are back in production, where is the Hot Wheels #Meyers Manx? Could it be that this metal/metal casting fell victim to the Hot Wheels mainline needing a plastic element in either the base or the body? Quite possible, but you would hate for it to go out like that. If that is the case, the Manx would make for a great #Car Culture release as it has appeared in several premium lines before. Hopefully the “Tangerine Dream” Meyers Manx belonging to former Hot Wheels Head of Design, Felix Holst, reminded Hot Wheels designer Jun Imai of the cool factor of this car’s Southern Californian roots, and he decides to get the Hot Wheels Meyers Manx back in one of the Hot Wheels lines by 2019.

@felixholst making a proper gentleman's entrance. If you want the wind in your face and smell like gasoline the rest of the day, he's your man. Good lunch as always Felix, nap time now. BTW, the tangerine dream Manx is for sale so if you'd like this glittery beauty in your stable, check out his IG for details.

UPDATE 07/31/2017 — It appears the Meyers Manx is now a #Discontinued Casting per the Hot Wheels Official Twitter account.