How cool would it be to have a Hot Wheels replica of your real car? Especially when your real car is a unique street beast like this? Only in your dreams, right? Well, that dream became a reality this year as Hot Wheels collector, Roy de Guzman had his real Hakosuka #Skyline appear at retail as part of the #2017 Hot Wheels #Night Burnerz Series. Upon meeting Hot Wheels designer, Jun Imai at the Japanese Classic Car Show in 2015, Roy’s car seemed like a perfect choice for the 2017 lineup — which at the time, was being planned given the production cycle of Hot Wheels.

If you didn’t know any better, it would be very easy to think the existing Hot Wheels #Nissan Skyline H/T 2000GT-X casting was designed around Roy’s car as it is almost exactly the same, however, Jun Imai actually designed this casting and it has been in the Hot Wheels lineup since 2011. In fact, Roy is actually a huge Hot Wheels collector himself and his car’s graphics are certainly Hot Wheels inspired. John over at the Lamley Group did a fantastic article about this car and Roy’s graphic inspiration — check it out HERE!

Earlier in June, Roy’s Hakosuka #Skyline (and its Hot Wheels version) were also featured on #Japanese Nostalgic Car — whose logo is actually featured on both 1:1 and 1:64 versions of the car. They were the ones that actually dropped a hint that this could be a future Hot Wheels car way back in an article from September of 2015. You may recognize the JNC logo and the name itself as it has been appearing on the sides of several Hot Wheels as of late. In JNC’s article about Roy’s car, they actually provide a list of Hot Wheels that are licensed by #Japanese Nostalgic Car.

In the Hot Wheels world, Roy’s Hakosuka #Skyline fuels the fire that burns for #JDM as of late. Who can argue, its a magnificent-looking car that is certainly well-deserving of being immortalized as a Hot Wheels car. Its appearing now as part of the #2017 Hot Wheels #Night Burnerz segment in the “M” case assortment — for the standard retail price of $1! As I’ve said before, nothing beats a real car replica for a buck! I can tell you that I was ecstatic to find this one on the pegs right away, so I can only imagine the happy dance Roy did when he found it himself. If you would like to follow Roy and his Skyline’s adventures — both in 1:1 and 1:64 form — make sure you follow him on Instagram: @royshakosuka. 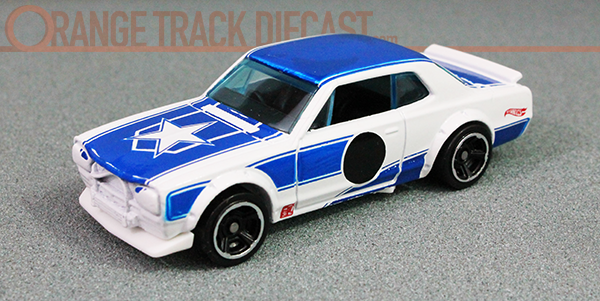 For more photos of your favorite Hot Wheels, check out @orangetrackdiecast on Instagram!