In what may be the funkiest Hot Wheels vehicle of the year, the #2017 New Models #Motosaurus blends two facets of kids’ culture — dinosaurs and Hot Wheels. Don’t think I haven’t noticed some of you collectors picking this up with your #2017 Hot Wheels “L” case assortment finds, stating that it was “for the kids”. 😉

Regardless of whether you pick them up for the kids of for yourselves, you have to love the creativity behind this one. I will admit that I picked one up for my 3-year-old daughter because I knew, if she saw it sitting on the dining room table (where I write for this site), she would ask to have it. Sure enough, between the time I took to photograph it for the site and me writing this article, she asked for it — and I, of course, obliged. 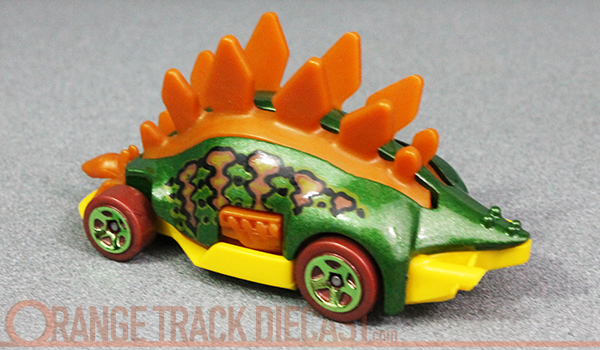 If you’re thinking the #Motosaurus was designed exclusively for boys, you’re wrong! This sweet dino-ride was designed by the lone female Hot Wheels designer, Lindsey Lee. She is a young, intuitive designer that you can tell accommodates for the play factor in Hot Wheels cars. Her first design, the #El Viento has a pop-off top. I’m not sure if this is her 2nd design or not, but she was definitely thinking of us parents out there as the plates on top of this Stegosaurus-modeled car are made of a pliable, rubber material. Thanks Lindsey, my future self thanks you after I step on this thing in the living room at 3am.

Depending on how long you’ve been collecting, you may not remember the other Hot Wheels stegosaurus casting Hot Wheels has made — the Speed-A-Saurus, designed by Larry Wood, which was produced from 1995 until 2000. That Hot Wheels casting had a removable stegosaurus that straddled an engine block, and featured some crazy exhaust. Lindsey’s #Motosaurus definitely seems more track-worthy as this dinosaur sits long and wide and has a lower center-of-gravity. This is one of many #Castings that Resemble Animals in the Hot Wheels #Street Beasts arsenal, and one of several features in the #Street Beasts Series (2017). Look for this one at retail now, followed by the brownish-orange colorway appearing soon in the #2017 Hot Wheels “P” case assortments. 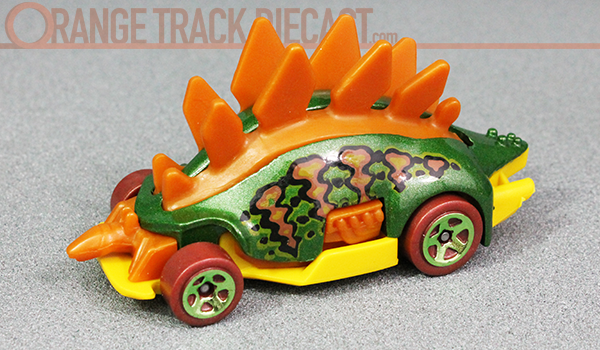 For more pictures of your favorite Hot Wheels, check out @orangetrackdiecast on Instagram!