When the team at Hot Wheels produced the #Dual Cool 5-Pack in 2005, it wasn’t their intention to have double the #Variations on the vehicles in it — let alone three different 5-Packs all together. If you were collecting back in 2005, you most likely remember this 5-Pack as the one that had the ’67 Mustang replaced by the #Deora II, hence the first and second releases of the 5-Pack. The third release of the 5-Pack netted some rather unique results as the two-tone (half & half) paint schemes were replaced with vehicles with varying flames on the sides.

The #Honda Civic Si (2001) was one of the vehicles in the #Dual Cool 5-Pack. Its original anti-freeze/black two-tone paint scheme was in the first two runs of the 5-Pack, whereas the flamed version was in the third. Why was the switch made? Well, as you can see below, when the cars were in the 5-Pack packaging, you could only see the one side. Without any side graphics — something Hot Wheels as a brand likes to add to increase point-of-purchase sales — the cars look very stock (or bland) as far as branding is concerned, and it was hard to tell what made this 5-Pack so unique.

Sure, once you get the car out of the packaging, its another story as the 5-Pack’s logo adorns the hood along with the Honda logo on the front. In today’s instant photography world, these are cool because we can line up our shots and just have fun changing the look of the car at every angle. Whereas, by 2005 standards, the digital photography industry was just taking off and we were still two years away from the first iPhone, so the days of endless pictures were only just beginning.

The “flamed variation” has silver/black tribal flames on the anti-freeze body. While it may look better in the 5-Pack packaging, the two-tone variation looks more unique at the 3/4 view, in my opinion. The #Dual Cool 5-Pack logo that graced the hood is now relocated to the b-pillar in a smaller, less visible form. Also, the Honda logo tampo is gone since the tampos are now on the side.

Surprisingly, there aren’t many of these for sale on secondary sites so establishing the going rate can be tricky. With the lack of supply and increased demand for earlier releases of the #Honda Civic Si casting, it may be difficult putting this pair together if you haven’t already done so. One thing is for sure though, this is definitely a dual cool pair! 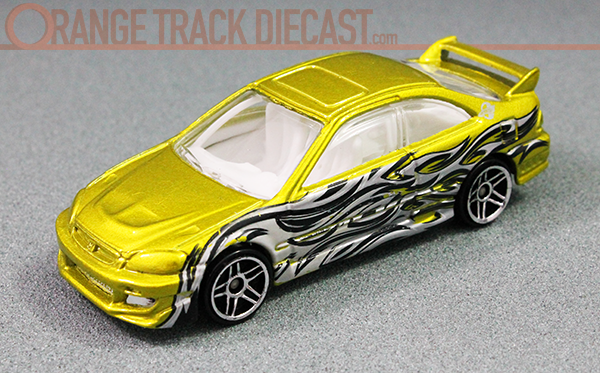