There is a new 5-Pack of #Hot Wheels Character Cars that just started hitting Target stores last week. Its the #Star Wars #Rogue One 5-Pack and it contains some pretty good looking Character Cars that haven’t been widely released as singles yet. Aside from the Jyn Erso vehicle, the #Baze Malbus, Chirrut Îmwe, Captain Cassian Andor and Death Trooper vehicles are all new, #First Edition releases.

Of these, I have been most excited to find the #Baze Malbus truck ever since I saw a photo of it hidden in a Twitter post a couple months ago. Judging by my affinity for #K-2SO, #Jabba the Hutt, #C-3PO and this, it seems as though I am gravitating towards these large #Star Wars #Character Cars. 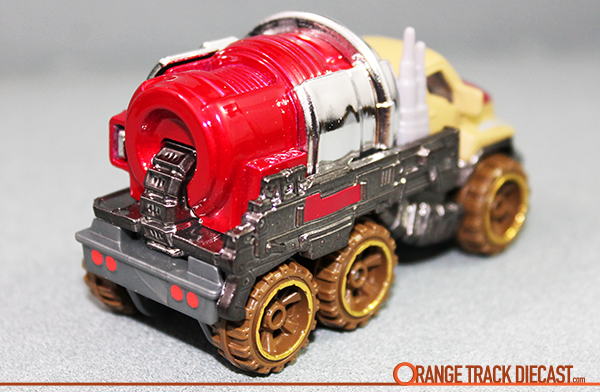 Deeper than that, this #Baze Malbus character car is more than just a large vehicle. This #Casting with 3+ Axles looks like a futuristic military/artillery truck that could survive a #Post-Apocalyptic Vehicle landscape. Just like many of the other realistic looking #Character Cars, give this to a customizer to slap a realistic paint scheme on and I’m sure they would have you convinced that it could be one if you weren’t already.

At the $4 price point here in the U.S., these #Hot Wheels Character Cars have some great detail as they typically consist of more pieces that your standard mainline car which has four (body, base, windows & interior). The #Baze Malbus truck looks to have SEVEN individual pieces to it, nearly double that of a standard mainline vehicle.

This 5-Pack is in stores now — I just saw four more on my hunting trip to Target this morning. Don’t forget its a #Target Exclusive so that is the only place you can grab it. If you prefer to wait for #Baze Malbus on the single card, it is out now at all retail outlets that carry the Star Wars Character Cars, but you may have to hunt a little as its in the newest wave that has just been released.

For more pictures of your favorite Hot Wheels vehicles, check out @orangetrackdiecast on Instagram!