In the latest installment of #Marvel #Pop Culture vehicles released by Hot Wheels, the ’55 Chevy Panel returns to showcase the comic book graphics of Ghost Rider — a stunt motorcyclist named Johnny Blaze. Blaze uses his demonic curse to fight evil at night riding his trademark motorcycle to do so. Clearly it would have been hard to showcase these graphics on a motorcycle so the folks at Hot Wheels found the next best thing, the #’55 Chevy Panel, whose original release featured “Hot Wheels Choppers” graphics and a motorcycle that rolled out the back.

Collectors who have found this release already have been disappointed however as the ’55 Chevy Panel’s signature feature, an opening door with a motorcycle coming out the back, is no longer there. While this is hardly a new development as last year’s #Pop Culture release (with 3 Musketeers graphics) was released with the same sealed shut rear door. Bummer, right? It seems as though this release had the potential to be so much more with the Ghost Rider chopper potentially rolling out the back! 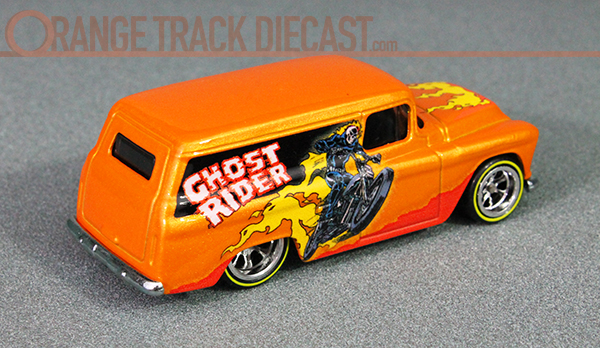 So while this release had the potential to be so much more, lets look at the many positives. First, that color, wow. That bright metalflake sunburst orange just seems to light up. Second, the GT Real Riders are a very custom-style wheel that completes the custom look of the panel. Lastly, the “ink-jet” graphics that have plagued the Pop Culture line seem to be gone as these crisp Ghost Rider graphics look stunning. I’ve always been a fan of Ghost Rider art so applying them in a way that gives the end-look a premium result, looks spectacular. To add to that, each side features its own unique artwork, a common trait of the #Pop Culture line. This one is at retail now, best of luck finding it as its the hottest vehicle in its mix. Happy hunting!