WOW! Gulf Race Team products have been selling like hot cakes over at HotWheelsCollectors.com (HWC). When HWC first released a 4-car series of Gulf cars in 2013, cars like the Porsche 917K and the Ford GT-40 sat for days in the Hot Wheels Shop whereas the Volkswagen Drag Bus and Volkswagen Drag Beetle sold out in hours — at that was at the $9.99 price point! Now, those same cars are selling anywhere from $50 to a whopping $120 a piece. Even the Gulf ’67 Camaro released late last year is selling in the $50 to $60 range.

This year we have already been treated with the Porsche 993 GT2 you see below (sold on March 15). A few notable differences between this and the Gulf cars from prior years are that the blister pack is gone and is replaced with an acrylic case and the car itself is sans Spectraflame paint … AND of course the price has doubled (up to $19.99). Given the recent popularity spike of the Gulf cars, it seems like a smart move on Hot Wheels behalf as this Porsche release sold out in a matter of hours. Some collectors were disappointed the Porsche came in enamel paint (versus spectraflame), but the enamel paint definitely gives the car a more authentic look since the 1:1 Gulf Racing cars wear the signature Gulf Powder Blue, not Hot Wheels Spectraflame. 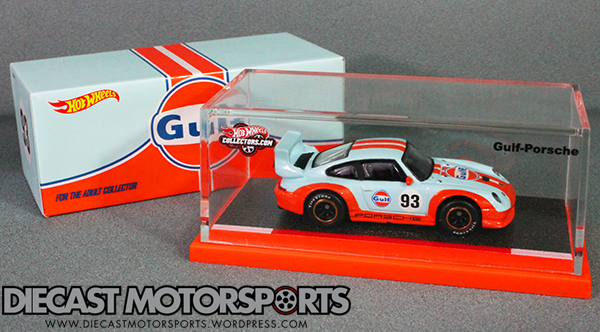 One can argue for either side of the blister card packaging versus the acrylic box package debate. I choose to sit on the fence and consider it a hybrid of the two. Loose collectors get their way being that the car is only a couple screws away from detaching from the base and “cardboard collectors” kind of get their way of having a sharply packaged collectible similar to that of Toy Fair releases and other high-end event releases. The only negative? You can’t thumbtack it to the wall — a method many collectors use to prominently display their packaged collections. The acrylic box the Porsche came in is extra nice since the car sits on a black piece of “track” complete with red and white turn markers on the side, commonly known in the track world as “rumble strips”.

Hot Wheels Porsches continue to sell well with the absence of licensing from several other exotic car brands such as Ferrari and Maserati. The Hot Wheels Porsche 993 GT2 is as hot as any as it just recently was released as a Super Treasure Hunt in the Hot Wheels 2016 mainline. Designed by Jun Imai and originally released in the 2013 Hot Wheels Boulevard line, this Porsche has had some nice releases in the basic lines as well as the premium lines. This Gulf Porsche 993 GT2 from HotWheelsCollectors.com was limited to 6,000 pieces and is already fetching $40+ on the secondary market. Its not hard to understand why as this beautiful piece will make even a non-collector smile. 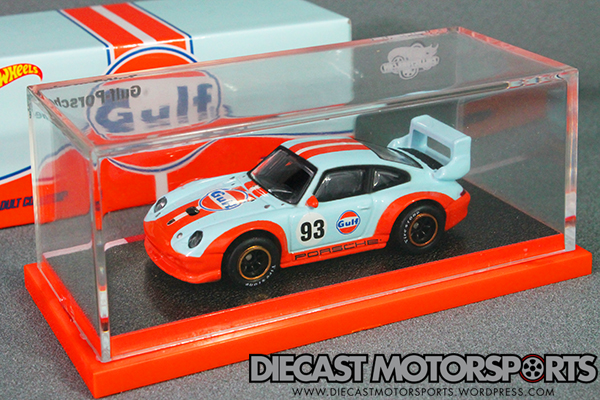