Yesterday we looked at the world of the AcceleRacers and how they brought us some rather “imaginative” castings that eventually found their way into the Hot Wheels mainline. Today, we look at another casting released in that same Metal Maniacs series from within the AcceleRacers line.

The AcceleRacers line was composed of four series or teams. You had the evil-robots in the Racing Drones, the hi-tech Silencerz, the edgy Teku, and the Metal Maniacs–the bulky, gear-head team that drove vehicles built out of scrap metal and high performance racing parts. For me, I appreciate the design behind the Metal Maniacs castings. Like I said yesterday, the designs seem to take a modern day vehicle and give it a futuristic, or even dystopian (post-apocalyptic) upgrade. Looking back, it must have been the scavenger nature of the Metal Maniacs, using scrap parts in their design, that contributes to that look.

The Rollin’ Thunder (shown below) was driven by Mitchell “Monkey” Mclurg in the movie and is another one of my favorite castings as it pairs well with the Hollowback. To me, it looks like an 8th generation Chevrolet Suburban (1978-1991) with that same futuristic upgrade the Hollowback received. They both share that engine that looks like an electric/fossil fuel hybrid powerhouse. In addition to that, the Rollin’ Thunder also has large air intakes in the front grill, roof, and both sides behind the driver-side and passenger doors. Combine that with the smooth look of the Co-Mold 5-Spoke wheels and this bulky Suburban-type SUV looks like it could be a sleek, streamline track star. 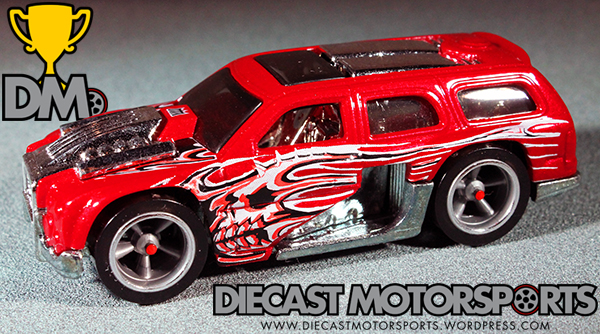