The year was 1998. I was a teenager that was fully immersed in all things Hot Wheels. My local Hot Wheels club in Milwaukee had downhill racing so my cousin and I rounded up our best cars and competed at every show. There was one problem. Someone brought this little red car from a previous generation of Hot Wheels, it read “Fireball Jr”. This thing was fast and would win the trophy at every show. We were so disappointed that everything we threw at “Fireball Jr” failed. Finally after months of throwing our best cars at the Front Runnin’ Fairmont known as “Fireball Jr” (due to its roof tampo), we put up the White Volkswagen Drag Bus that was exclusive to the 1998 Custom Car Designer CD-ROM Game. The VW Drag Bus barely beat the Fairmont and we emerged victorious–bringing home the 1st place trophy.

But why is this little car from the 80s so fast? Why did it take one of the most successful gravity/downhill racers in Hot Wheels history to beat it?

Well first, the obvious thing about this car is that its metal/metal, meaning that it has a diecast body as well as a diecast base. As of late, more and more plastic has been infiltrating the mainline but this car was dominating gravity/downhill tracks in the ’90s when plastic cars (either body or base) were not as prevalent. Could it be the axles? Before there were the High-Speed Wheels (HSW) of 2012 and even before the Faster Than Ever (FTE) Wheels of 2005, there were the Gold Hot Ones (HO) Wheels of the 1980s. They have been rumored to be the first cars Hot Wheels produced with Nickel-Plated Axles. Nickel-plating axles causes them to have less friction occurring when racing than non-nickel-plated axles.

But why this model? Why does it dominate other Hot Ones from the 1980s?

I have asked myself this over the years. Truthfully, I have not found a precise answer. I recently obtained the version of the Front Runnin’ Fairmont that gave us some much trouble downhill racing in the late 1990s. “At first roll” …rolling across my desk… the utter smoothness is pleasing as it seems to glide, which is kind of astonishing because of this car’s “play-wear”. I compared this to a few cars from today, the ’90s, and even another car from the ’80s. They all had what I call a loose, ratchety-sound to them. One can only speculate as to the reasoning behind the smoothness the Fairmont brings. But for now, I leave you with one of the few cars in my downhill racing hall of fame. 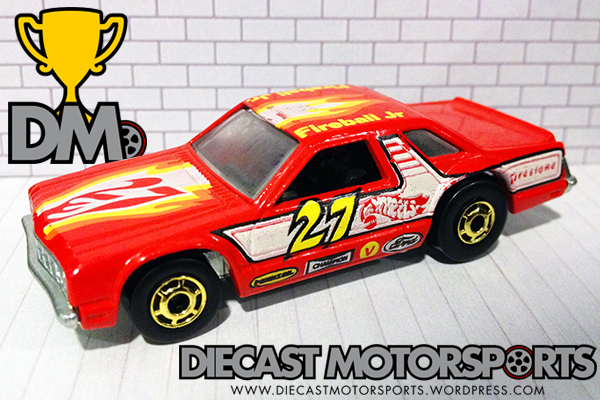 If you are (or aspire to be) a Hot Wheels / Diecast Racer, check out redlinederby.com. Its a great resource for all things related to racing your toy cars.