How many Hot Wheels cars did you crush as a kid? I know I mutilated a few in my adolescent years as many ’80s blackwalls met the hammer, brick, and flame. When did the destructive behavior begin? It was near the sandbox were many Hot Wheels met their demise as my monster trucks needed crushed cars — for realism, of course! I am far removed from smashing my last car as I ended up pulling a 180, collecting only mint pieces. So naturally, when these crushed cars were sneak peeked by the @hotwheelsdreamteam, I became intrigued. 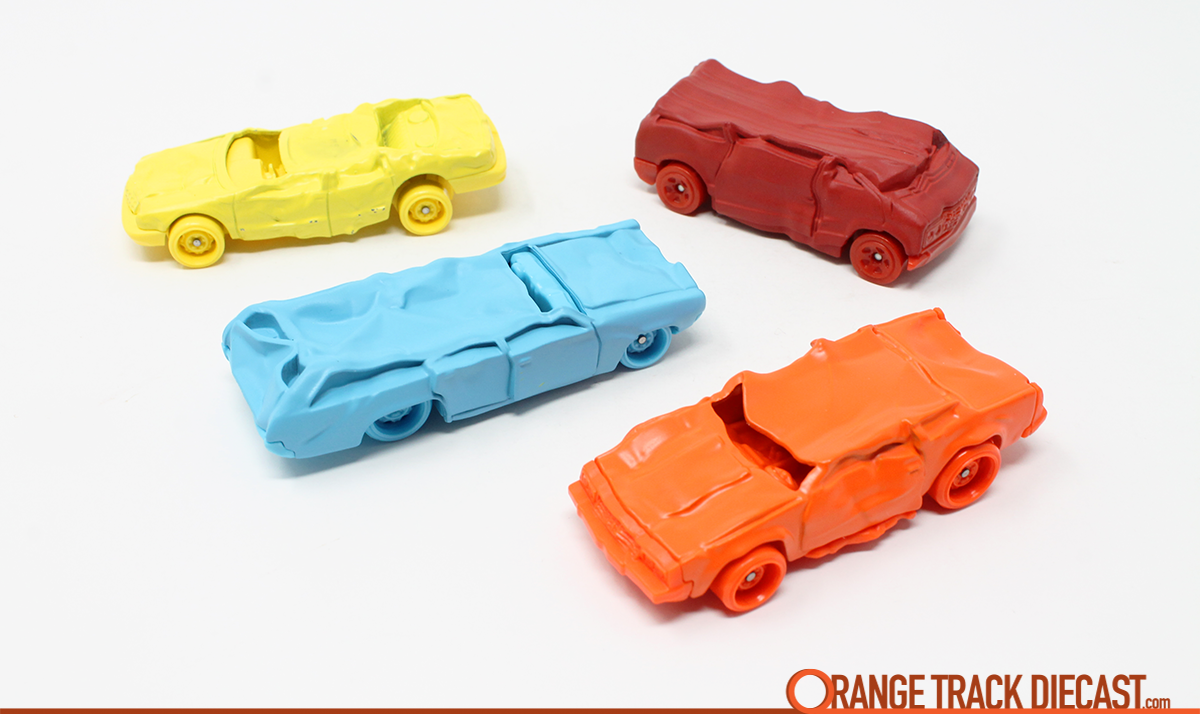 Fans of the #Hot Wheels Monster Trucks line know that designer, Brendon Vetuskey has been a driving force behind the line’s bright future carrying over some ideas used in the #Monster Jam days, but also introducing a few stellar improvements. For instance, the #Crushed Cars — which I spotted hitting retail in Canada already — will come as a bonus car to a special wave of Hot Wheels Monster Trucks. Brendon utilized existing Hot Wheels castings as a starting point, modifying every distinguishing detail to take it from licensed to unlicensed, then proceeded to CRUSH the cars in the digital world, ultimately creating four brand-new designs.

From a collector standpoint, I think the fun in these is trying to figure out which castings these vehicles were originally, so I’ll leave that for you to guess in the comments below. However, I did want to provide a head-to-head example of the lengths that were made in creating new designs from existing files so I decided to use the #Blind-Sided as an example. You can see that the Hot Wheels #Custom ’77 Dodge Van was used as a starting point.

As you have probably guessed by the name, “Blind-Sided”; all of the crushed cars have names that refer to being crushed. Sticking with #Blind-Sided, the roof was clearly flattened. Notice how well the standard #Hot Wheels Monster Trucks wheel fits within it. 😉 Its not just the roof though. “Battle Damage” was essentially added throughout this new casting from the creases within the body to the dents and dings within the front grille. 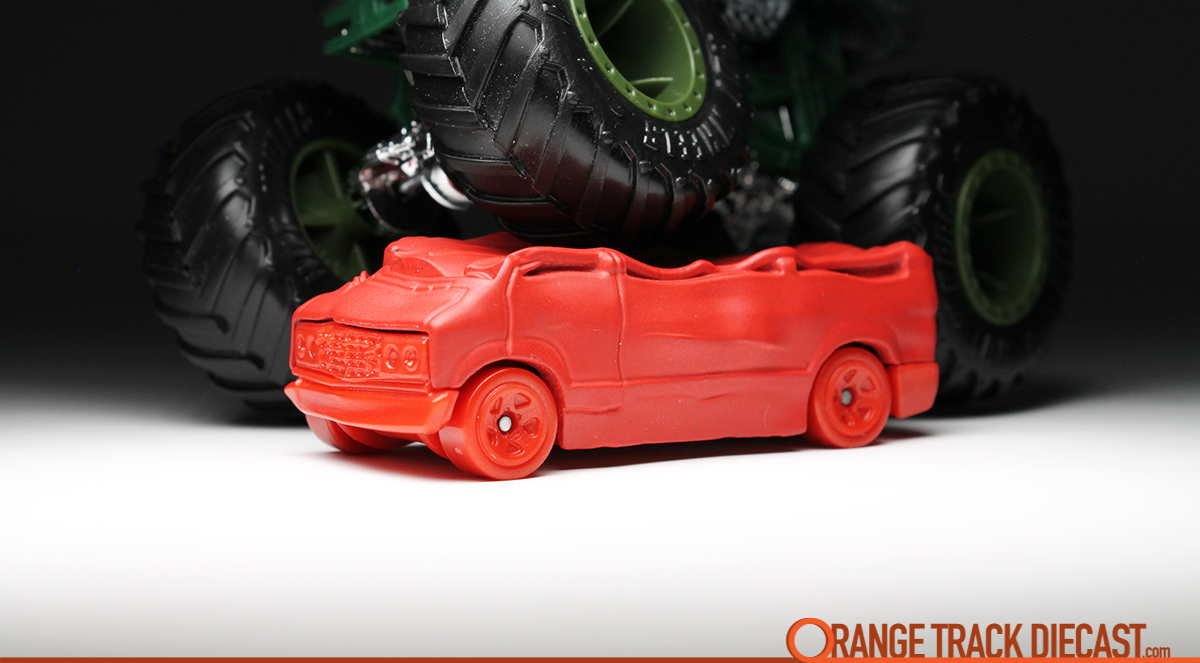 The Hot Wheels #Flat Iron takes its style cues from a #Station Wagon that was originally cast for a classic television show in a premium line — a #Brendon Vetuskey Design. Its clearly the flattest of the four vehicles, making the name “Flat Iron” very appropriate.

The orange-colored, #Speed Bump is nothing more than that to a monster truck. Its the only car of the four to feature a name of a previous Hot Wheels casting as it was previously used for the “Drop Tops Speed Bump” in 2005.

Lastly, #Sudden Stop is a car that looks as the name implies: it came to a “sudden stop” and was rear-ended, hence the raised back end. Throw a monster truck on top and it looks as though this car is in the midst of becoming a taco. It’s so hideous, it’s awesome.

I don’t ever recall seeing diecast representations of actual #Crushed Cars before. Sure, we’ve seen demolition derby cars with varying levels of damage from Hot Wheels and other diecast brands, but never something that is completely crushed. Well, almost completely crushed, as these still roll down the orange track quite well!

The other component to these is that they are all painted in a solid color. From the body to the base, to the wheels: this is something that has been done at monster trucks shows as far back as I can remember. I don’t recall the actual reasoning behind this, but it’s great that Brendon and the team were able to carry that over that sense of realism to diecast form.

As you could probably tell from this article, I am extremely excited for these to hit retail. I think some collectors (and kids) will really appreciate the work that went into them. From a longevity standpoint, I don’t believe you’ll ever see these outside of the #Hot Wheels Monster Trucks line. These are a far departure from anything the Hot Wheels brand has done before, and it wouldn’t seem as these would appear as anything more than a bonus car. Never say, “never”, but you’re chance to own some of the craziest cars Hot Wheels has ever produced will come soon. These should be hitting soon — most likely wherever Hot Wheels Monster Trucks are sold.