How many Hot Wheels collectors know the story behind the #2009 Treasure Hunts: #’57 Plymouth Fury? I vaguely remembered it being based on Hot Wheels Designer, Brendon Vetuskey‘s real car at the time. So recently, I had a chance to catch up with Brendon and talk to him about this release — knowing I wanted to #Showcase it here on OTD.

Around the time Brendon started working at Mattel, he saw that the #’57 Plymouth Fury was slated to be a #Treasure Hunt in 2009. He approached former Hot Wheels Graphic Designer, Wayne Scott, asking if he would consider replicating his 1957 Plymouth Belvedere. Wayne obliged and not only was Brendon’s car immortalized as a Hot Wheels car, but it was also immortalized as a super and regular Treasure Hunt. Since Brendon’s car was actually a Belvedere and the Hot Wheels casting being used was the Fury, Wayne had to remedy the trim level issue — which kicked up in the back on the Fury — by adding the Hot Wheels flame licks on the end of the side trim. 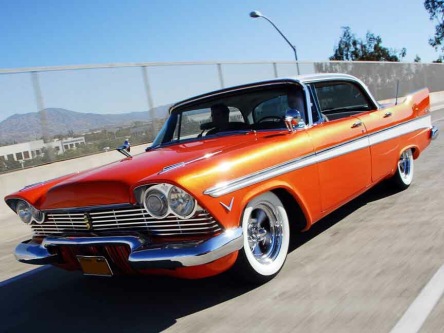 Brendon no longer has this gorgeous orange Belvedere as he is rocking his BV-Bird (Custom ’67 Firebird) these days, and building his own 1:1 scale ’55 Chevy Bel Air Gasser after designing the Hot Wheels one. When asked why, he stated that, “It was fun to drive and play doo wop music in”; and that, “It was not fun to have to clean it every time [he] drove it and wonder where [he] could safely park it”.

After seeing pictures of the real thing, you can see why Brendon had a rational paranoia around driving it. Just a remarkable car inside and out.

In 2009, Hot Wheels only had the #’57 Plymouth Fury casting to use and it was this #2009 Treasure Hunts release that was chosen to replicate the car. Larry Wood designed the Fury, whereas Brendon would later go on to design the ’58 Plymouth Belvedere casting — which made its debut in the 2013 Boulevard line.

The #2009 Treasure Hunts release of the #’57 Plymouth Fury ultimately came in two #Variations: regular and super treasure hunt. Both of which could be a  closer representation of Brendon’s Belvedere than the other. The paint on the regular is spot-on as the metalflake orange just sparkles if you can get it out in the sun, just like the 1:1. The super has the #Real Riders 5-Spoke Wheels with #White Wall Tires which more closely represent what was on the actual car.

Wayne chose to even replicate the yellow California license plate that was on Brendon’s car. Unlike the 1:1, this Hot Wheels variants simply said, “BRENDON”. The “TH” logo graces the bottom-right corner of the trunks on both super and regular #Variations.

Personally, these #’57 Plymouth Furys have always been among my favorite #Treasure Hunts of all-time. Knowing the full-story now makes me appreciate these #Variations even more. It’s always cool when Hot Wheels can replicate real 1:1 vehicles as those tend to be among my favorite stories when it comes to Hot Wheels and collecting. Brendon’s Belvedere may have moved on to a new owner, but it is these Hot Wheels that will capture its essence for future generations to enjoy.