Recently, I have been trying to pick up Hot Wheels that I have passed on in the past. My tastes have changed so much as a collector — as well as the way I collect — over the 20+ years I’ve been collecting. Suffice to say, I am always looking for a great deal. Finding deals on eBay has been rough lately as demand for Hot Wheels in general has pushed prices up. That isn’t to say there aren’t any, but rather, they are just fewer and further between. I tend to watch so many items, that my “watch list” is always reaching capacity. Last week, time was expiring on an auction for the #5th Annual Nationals Convention #Volkswagen Microbus. There were no bids, so I made one — and won! Its funny because this was actually from the last Hot Wheels Nationals Convention that I have been to (2005). I remember buying these and ultimately selling them at the time because they were a hot commodity, and I wasn’t really a fan of #100% Hot Wheels — opting to keep the ’67 Camaro and Scorchin’ Scooter instead. Some 14 years later, my tastes have obviously changed, and this was one piece I had to have when the price was right. The whole top-half of the #Volkswagen Microbus is an #Opening Feature, revealing a multi-piece interior as well as a huge air-cooled engine in the rear. The way this casting is set up, the engine protrudes the base and you can see the exhaust system extend outwards through the rear (see picture below). The top is done in a metalflake white paint, while the bottom part of the body is pink enamel. The rear Illinois license plate reads, “NATIONALS”. The graphics and convention logo were done by Mike McClone. 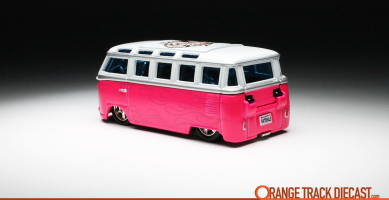 If you collect the #100% Hot Wheels line — which has been discontinued for some time now — you’ll probably recall the #Volkswagen Microbus and its paneled brother. Both were #Larry Wood Designs and made their debut in the 2001 Hot & Classic Bugs & Buses 4-Car Set. The panel bus was last released in 2006, and this VW Microbus was last done in 2008, before the tools were ultimately destroyed.

Collectors that have been around more recently will certainly recall the Volkswagen T1 Panel Bus which had its fair share of #Pop Culture releases. That casting is a lot larger than this #Volkswagen Microbus. Since the Microbus was made for the #100% Hot Wheels line, it means that it was more likely to have been made to true 1:64 scale.

I can’t believe it took me 14 years to finally obtain one of these #5th Annual Nationals Convention #Volkswagen Microbuses. It really is a cool piece and one that may inspire me to grab a few other releases of this casting. For now however, I am happy with my most recent score. Please excuse me while I go look at it some more…