The #2019 Hot Wheels “G” case #Treasure Hunts rival that of any other case code for 2019, as they each are among the top as far as #2019 Treasure Hunts go. The paint and wheels are special on the long-overdue, ’92 Mustang super — which we featured the other day. Just like the ’92 Mustang, the #Corvette Stingray was long overdue. The casting has been around since 1976, but has never been a Treasure Hunt before. So, its only fitting that the Corvette gets wrapped in something that also made its debut in 1976: the #Super Chromes.

The #Super Chromes came post Spectraflame-era. They were a flashy way to lure in the consumers that had been mesmerized by the #Spectraflame Paint several years earlier. Did it work? It may have, but ultimately the Super Chromes were disbanded in 1978 due to either a failed retail strategy or cost — or both. Years later, niché collectors would ask Mattel the bring back this series, only to have their request finally answered in 2003 with a 4-car segment in #HWC Series 2. Three years later, the Super Chromes (2006) would finally make their way back to retail as a #Target Exclusive series. By the end of 2007, Target had moved onto other nostalgic lines. The Super Chromes would ultimately make their way back to the mainline in 2013, and continue through to this day. For this latest wave of Super Chromes, the chrome-plating of metal bodies would be replaced by using a chrome VUM process over plastic-bodied Hot Wheels.

With only plastic-bodied Hot Wheels being eligible for the mainline #Super Chromes segment, we have seen a lot of fantasy castings appear in the series from 2013 to 2019. This year, collectors have applauded the decision to include licensed vehicles. The #Corvette Stingray is one of five cars in this year’s series, however, it — along with the #Custom ’77 Dodge Van — are the only licensed vehicles. We featured the collector-favorite, Custom ’77 Dodge Van earlier in the year.

The #Super Chromes (2019) #Corvette Stingray features a very “patriotic” deco as this American car is lined with red & blue stripes. White stars adorn the hood and sides, along with the “SUPER CHROMES” logo and the signature, regular #Treasure Hunt, circle #Flame Logo (TH). 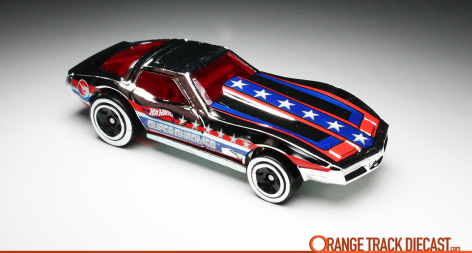 The Hot Wheels #Corvette Stingray casting may be a little wonky as its seen several retools since 1976. On this plastic-bodied release, the body lines aren’t as crisp as some of the more modern day tools, and it no longer has an interior — which was part of the window piece in an earlier version of the casting. Still, this #Super Chromes release is as nostalgic as it gets pairing a ’70s casting with a familiar ’70s deco, AND making it a #Treasure Hunt. If recent years have taught us anything, its that we can expect to see this car again (not as a TH) later in the year, in gold-chrome. Until then, this is one regular Treasure Hunt that you’ll most likely want to seek out as it does scream Hot Wheels nostalgia. Look for it, along with the Super ’92 Mustang, in the #2019 Hot Wheels “G” case assortments.