4/8/2019 — The Finale at every Hot Wheels convention is typically a treasure trove of sneak peeks. This year was no different. We will start with “the boards” and what physical samples were actually shown, followed by the Sneak Peek Slideshow Presentation.

The much anticipated “return of Bugatti” was on display in the form of the ’16 Bugatti Chiron (blue). It will appear in the 2019 HW Exotics. It was accompanied by the ’19 Mercedes-Benz A-Class (white, ’19 Factory Fresh), ’68 Dodge Dart (silver, Larry Wood 50 Years of Design), and ’19 Ford Ranger Raptor (blue, ’19 HW Hot Trucks). Lindsey Lee Designed the Ranger Raptor.

The Miata returns to the mainline as will with the ’91 Mazda Miata MX-5 (blue, ’19 HW Speed Graphics) and two cars from the Satin & Gold series (’63 Chevy II and Custom ’67 Pontiac Firebird) look great in their first “non-grainy photo”.

Three “First Shots” here of the Mod Rod (’19 Factory Fresh), Road Bandit (unknown), and Range Rover Velar (’19 Factory Fresh). Not sure yet where the Road Bandit will show up, but it looks to be based off of a Filipino Jeepney … if thats the case, you can expect the graphics and paint on this one to be quite vibrant. Its possible this may be the first known 2020 mainline car.

The Lamborghini Aventador J (dark orange, ’19 HW Exotics) is the only Super Treasure Hunt shown on the board. Its joined by another ZAMAC in the ’67 Chevelle SS 396 (’19 Muscle Mania) and the electric redesign of the Twin Mill, the Twin Mill Gen-E (Turquoise).

Here is the Larry Wood 50 Years of Design Bone Shaker, close up. Love that satin gold paint! Hot Wheels Graphic Designer mentioned that it is a first-time finish that is comprised of a special VUM finish.

Also, here is a closer look at the Road Bandit. Search “Jeepney” on Google and you can see what you can expect this casting to be decorated like.

It seems every year the Hot Wheels Premium Lines get better and better. We start out with the Nissan Fairlady Z (white) which will be paired with the Sakura Sprinter in the Team Transport series, with a classic Nissan livery. The Honda S2000 (gray) will be in the Street Tuners Car Culture segment, whereas that “Smokey & The Bandit”-looking ’77 Pontiac Firebird T/A will be appearing in the next wave of Fast & Furious Premium: 1/4 Mile Muscle.

The Beatles album, “Revolver” is emblazoned on the sides of the Combat Medic (white) in another mix of Pop Culture featuring The Beatles. Also in that mix is the Volkswagen T1 Panel Bus (dark silver) with Abbey Road graphics. Sandwiched between those two is a prototype of the new Hummer H1 casting. No word yet on where this will show up.

The Mercedes-Benz 190E (green) will be making an appearance in Team Transport with the Fleet Flyer, both of which will be decked out in a Falken Tires livery. The Rocket League Bone Shaker (blue) will be appearing in an upcoming mix of Replica Entertainment. The Red ’70 Chevelle SS will be one of two versions of this new casting appearing in the next mix (1/4 Mile Muscle) of the Fast & Furious line.

Three new castings appearing in the premium lines… I don’t have their exact names (as they may not even be finalized yet), but I believe them to be the Classic Volkswagen Beetle (red), Custom D21 Nissan Truck (yellow) and the ’91 Mercedes-Benz G-Class (zamac).

The Skyline Silhouette (red) and RWB Porsche 930 (matte black) are already being found in Australia as they are in the Car Cultures Silhouettes Series, but the double-layer Team Transport truck is definitely new. It probably won’t come with two cars, but it will be interesting to see what livery it will come in so you can find a second car to place on top.

Lastly, 3 more new premium castings which may not even have names finalized yet. From left to right, they look like the Land Rover Defender 110 Hard Top, Nissan Silvia CSP311 and the Jaguar E Type. No idea on where these are expected to show up.

Same three cars from the rear. The Defender looks to be wearing a new “8-Hole” Real Riders hub.

The mainline cars were shown first. It appears the ’67 Camaro will be the regular treasure hunt in the HW Art Cars segment. Two super treasure hunts were shown in the Lamborghini Aventador J (HW Exotics) and the Porsche 911 GT3 RS (Factory Fresh). Those have been added to the OTD 2019 Treasure Hunts Tracker. Also, we fill in a ton of gaps on the Official 2019 Mainline list with these new models: Aston Martin Vulcan, ’16 Bugatti Chiron, Alpine A110, Audi RS5 Coupe, Jaguar XE SV Project 8, Mod Rod, and Range Rover Velar. How about that “Day of the Dead / Dia de Los Muertos” style ’64 Buick Riviera from the HW Art Cars? That looks menacing! Also worth noting that it will be the first time the #Skull Wheels appear in the mainline. 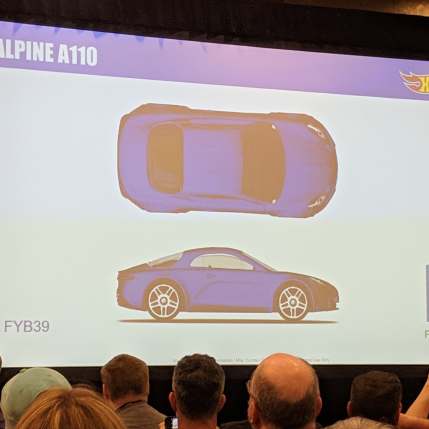 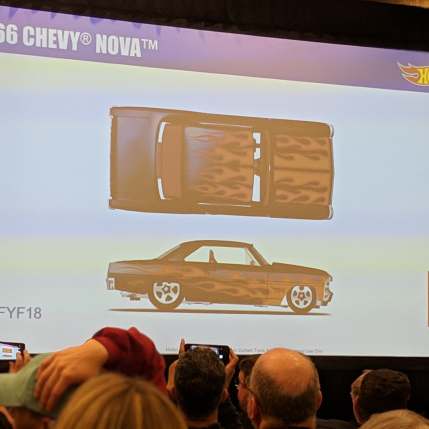 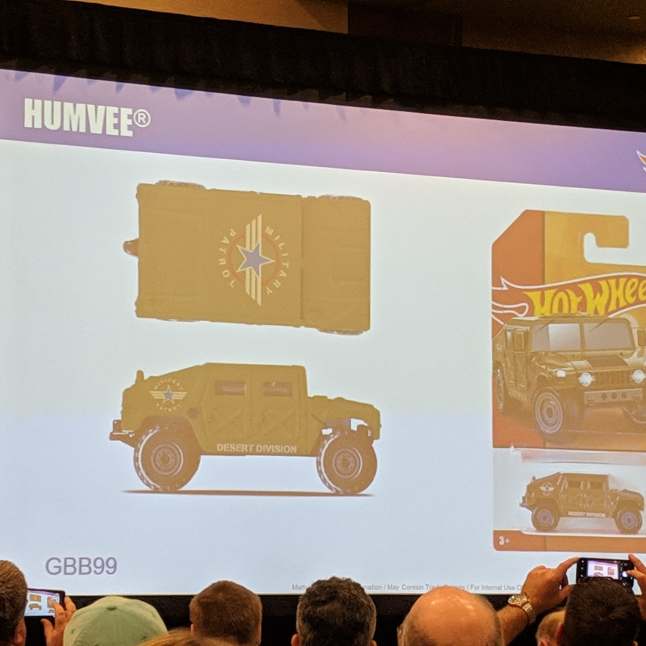 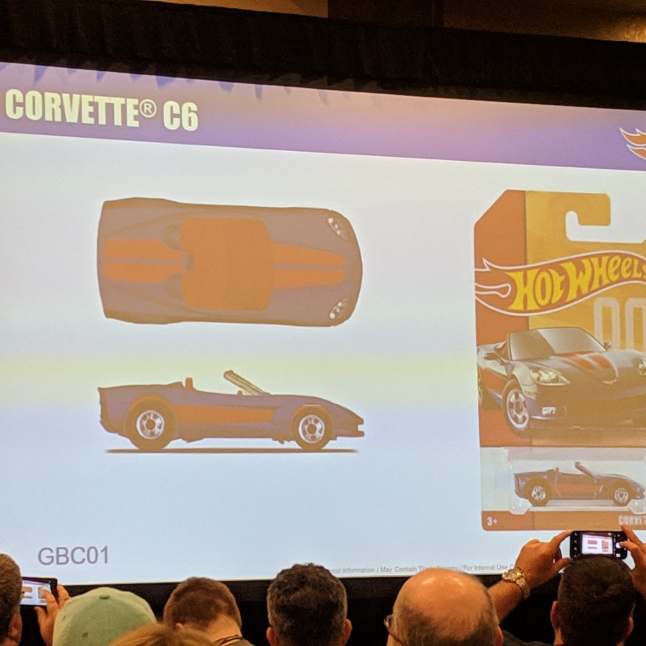 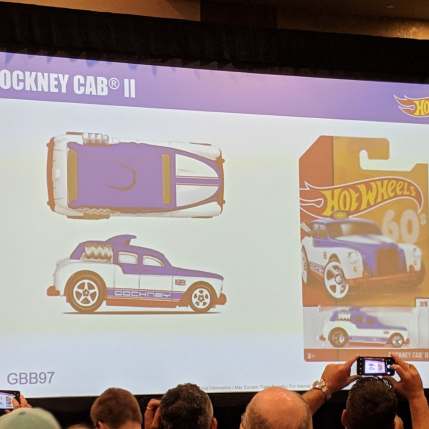 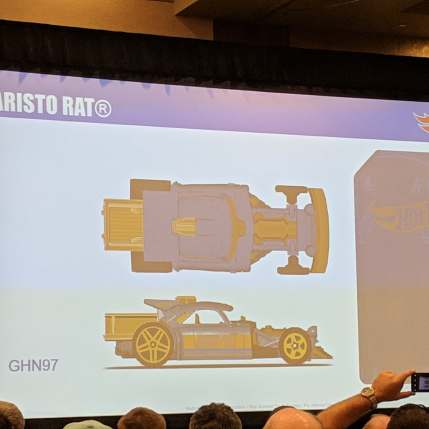 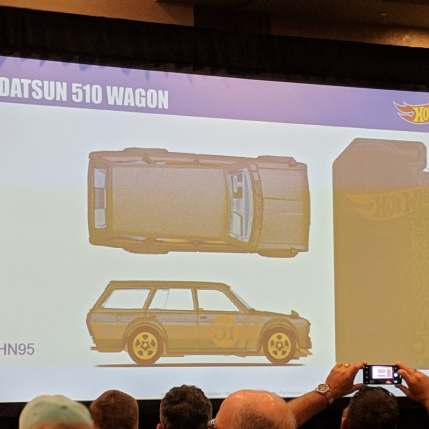 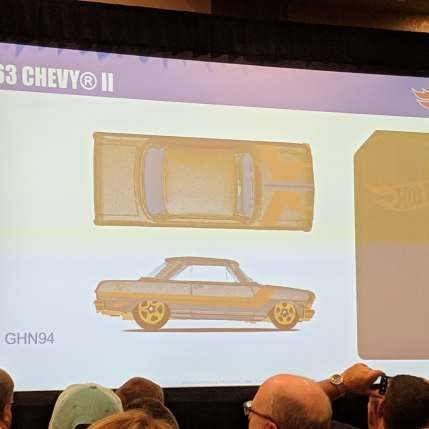 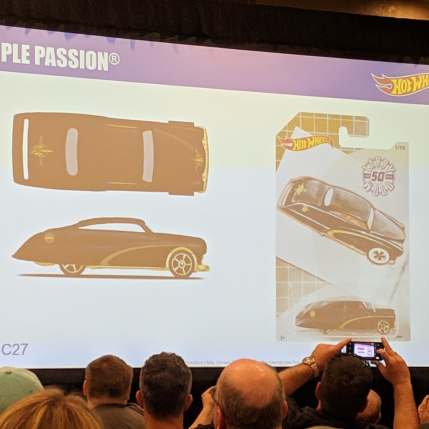 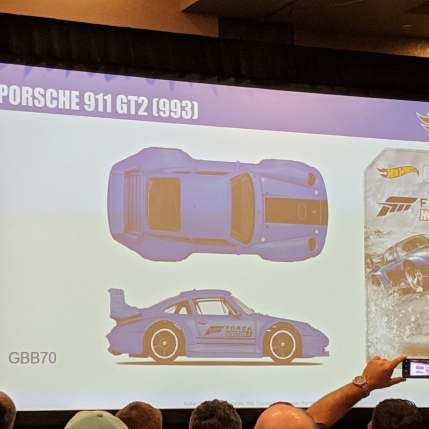 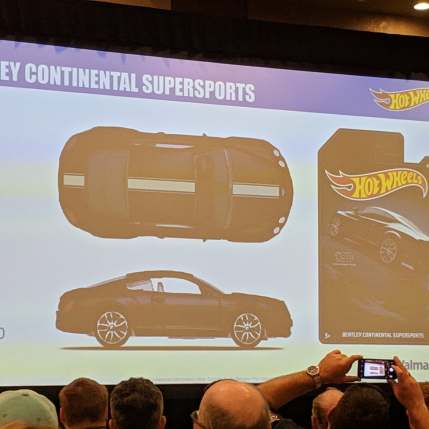 We got our first look at the next segment (presumably) of Car Culture: Street Tuners. The ’96 Nissan 180SX Type X, Honda S2000, ’95 Mazda RX-7 and Nissan Silvia S15 all make an appearance in that, along with the brand-new, Pandem Subaru BRZ casting. Releases from the next two case codes of Team Transport (D & E) were shown. Falken and Nissan sets will be in “D” and the MOMO and R34 / Aero Lift sets will be in “E”. This marks the first time the Aero Lift truck will be released. We had Fast & Furious / 1/4 Mile Muscle previewed HERE … so view that for better images. Two “known” mail-ins were shown in the Dairy Delivery and ’84 Mustang SVO. Next mix (presumably) of Replica Entertainment looks hot with the Forza Raptor, Gumball 3000 Subaru, Rocket League Bone Shaker and Toy Story RC Car and Pizza Planet Truck. 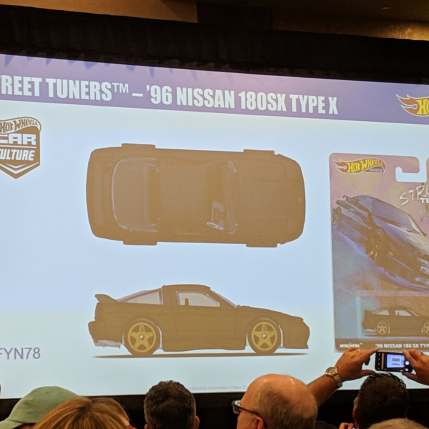 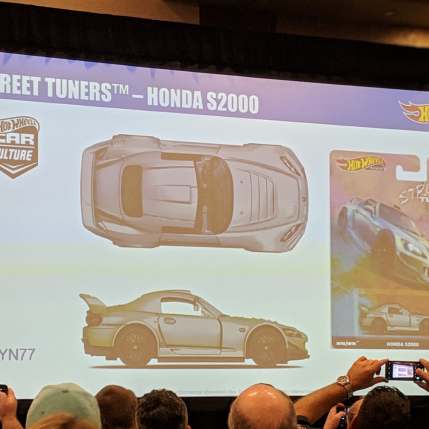 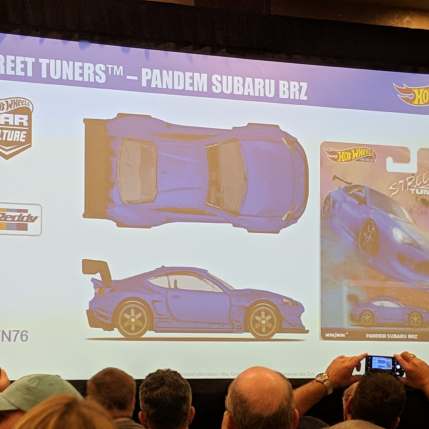 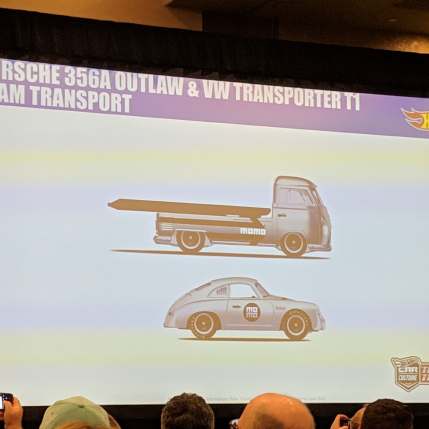 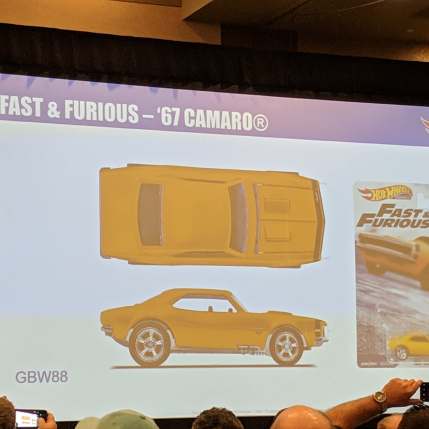 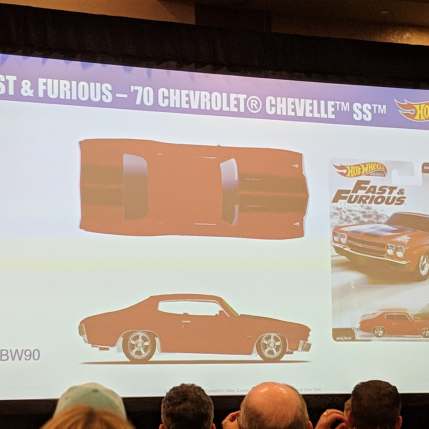 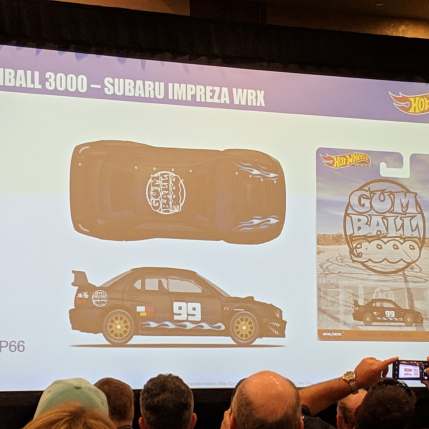 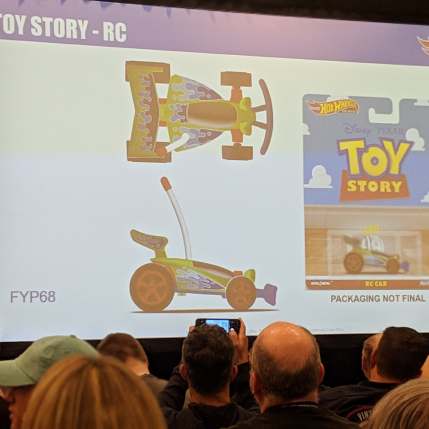 Lastly, the cream of the crop is in RLC this year with all of these likely being first day sellouts. Most we’ve seen before but we do get shots of the final deco and packaging for the RWB Porsche 930, ’82 Lamborghini Countach LP500 S, and ’55 Mercedes-Benz 300 SL. We do get the final colors on the opening hood Skyline R34 and adjustable suspension ’69 Chevy C10.  The Tootsie Roll ’66 Chevy Super Nova is new. Looking forward to seeing if that will be spectraflame paint on that one. Also, the rumored Gulf Racing ’17 Ford Raptor makes an appearance here, confirming collectors’ sneaky suspicions. Next sale should be between the chameleon paint ’72 Datsun 240Z, ’41 Willys Gasser or the “ammo-can” ’55 Chevy Bel Air Gasser. All apparently are ready to go! 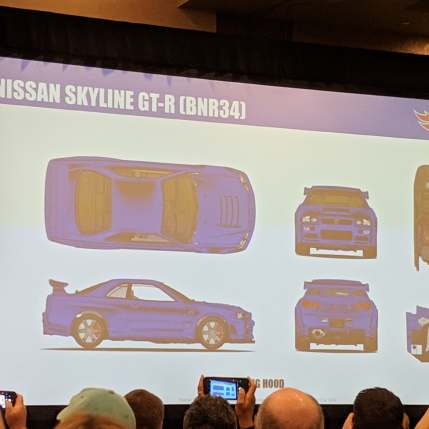 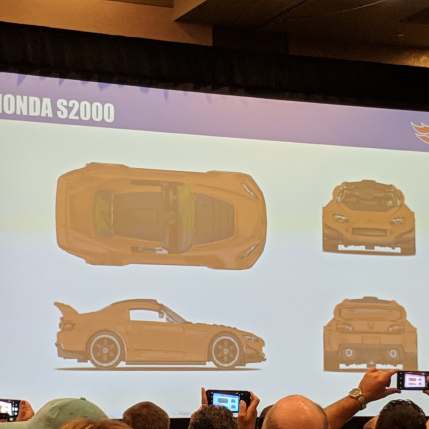 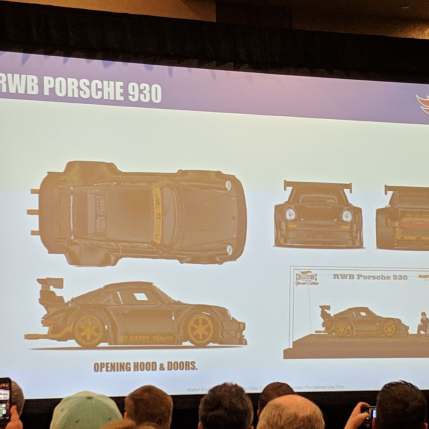 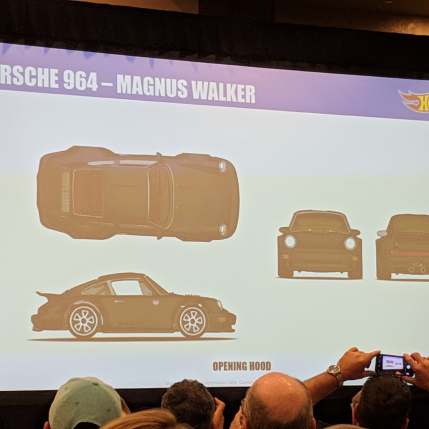 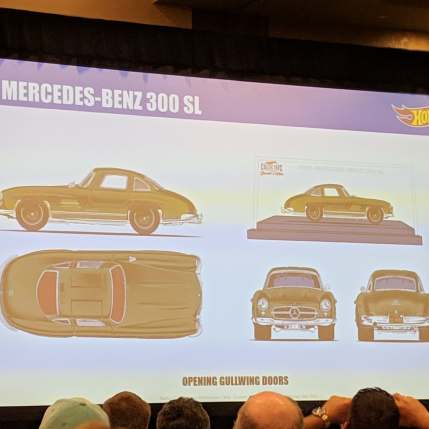 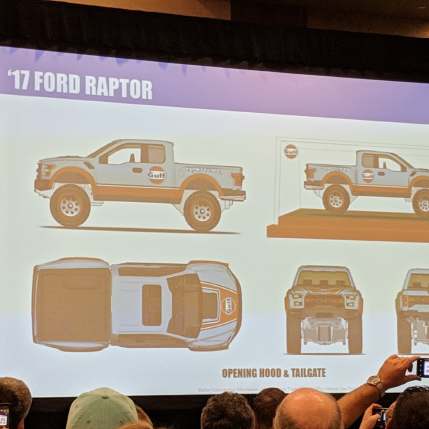 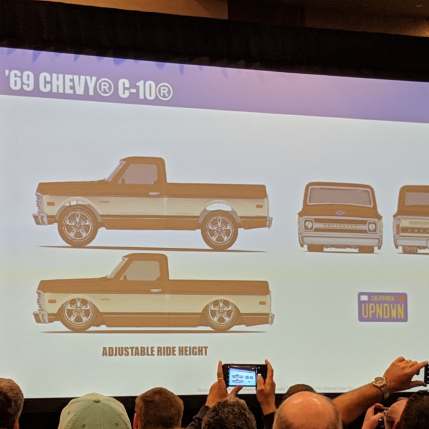 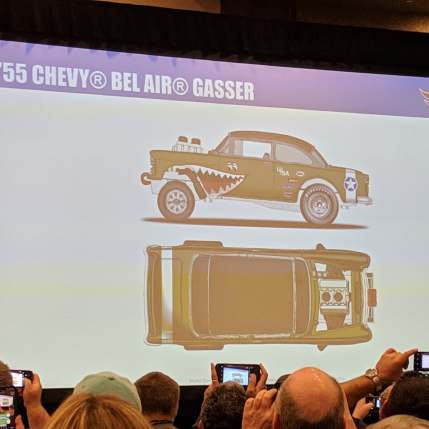 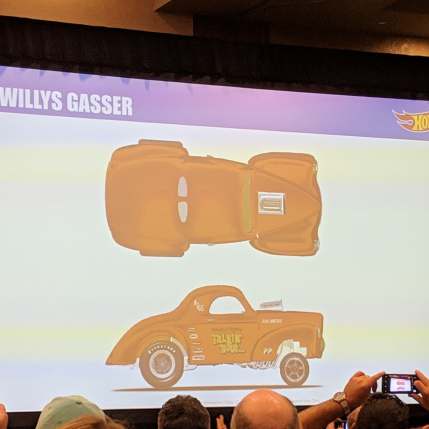