Replica Entertainment / Back to the Future Part III: BACK TO THE FUTURE TIME MACHINE – 1955

How can a car with no #Real Riders be in the #Replica Entertainment line? Is Mattel getting cheap? Short answer: No.

This was the reaction of a handful of vocal collectors across social media when it was shown that the latest iteration of the iconic DeLorean Time Machine from the #Back to the Future (BTTF) movies, would be in the second mix of #Replica Entertainment for 2019.

Yes, I know it doesn’t have any tires… have we gotten past that yet? See, the #Replica Entertainment line is just that… replica #TV & Movie Cars — and video games too. In order for Hot Wheels to create BTTF Time Machine that was seen towards the end of the 3rd movie, they had to develop an “1885 wagon wheel” just like the one in the movie. Since there were no rubber tires in 1885, and this car was “built” to be pushed down the railroad track by a train, it makes perfect sense why the Hot Wheels car does not have #Real Riders — because it shouldn’t! 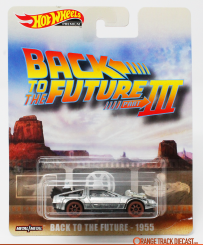 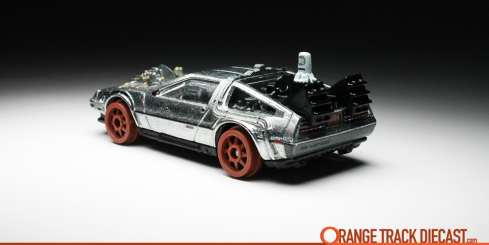 Secretly, I had been hoping Hot Wheels would eventually make the “railroad version” of the BTTF Time Machine for quite some time as its an iconic vehicle. I just never thought they would since a new wheel had to be conceived before they could do so. Suffice to say, they did it, and now the BTTF Train (or Train Time Machine) moves to the top of my wishlist — which would make for an awesome Car Culture / Team Transport set. *wink* *wink*

Overall, its a great replica release of the BTTF Time Machine. I have to assume that we will see it again OR see the #8-Spoke Wagon Wheels in some other capacity since I am not sure if there has ever been a Hot Wheels wheel that has only been used once, on one specific release.

For you guys that race your Hot Wheels, keep in mind that this is a metal/metal #DeLorean with plastic wheels. The thin lip on the inner portion of the tire makes me hypothesize that this could be pretty fast on the orange track… something that I may have to test if I get another.

As for now, this #BTTF Time Machine – 1955 is showing up now at retail in the second wave of #Replica Entertainment for 2019. Its actually one of two #Back to the Future cars in that mix with the other being Biff’s Ford Super De Luxe with manure. Get them now before you’re “OUTATIME”.