Year to year, its always fun to see what mainline series Hot Wheels collectors gravitate to. There are segments like #Muscle Mania and the #Night Burnerz that are perennially collector favorites. However, its always that new “underdog” segment that fascinates me. I have a good grasp on what collectors are talking about on social media and this year its the #2018 Hot Wheels #Checkmate series. Most of it is curiosity, but there have also been many collectors who have been proclaiming this will be one series they finish this year — and then some — as they look to build their very own Hot Wheels chess set.

If you are unaware how the #Checkmate series will translate to the chess board, let me break it down for you. There will be nine cars, all released in black (in 2018 case codes), which are as follows:

In order to complete one side of the chess board (16 pieces), you will need: 1 King, 1 Queen, 2 Knights, 2 Bishops, 2 Rooks and 8 Pawns — meaning, one each of the King Kuda and Velocita, and two of the rest (all in black). In order to complete the full board (32 pieces), you will need a second color — which, in this case, you can pretty much assume there will be a white colorway of each car in this series. Repeat that top formula for the “white side” and you’ll have your very own Hot Wheels chess set. Just a fantastic idea!

Among the cars in this #2018 Hot Wheels #Checkmate series is the #’07 Ford Mustang which is the “Knight”. Its inclusion in this series may look a tad random, however, let me throw out a theory that justifies its placement. In 2008, the reboot of the TV Series, Knight Rider had a very similar looking #Ford #Mustang playing the role as K.I.T.T.. Hot Wheels has never made this “Neo-K.I.T.T.” Mustang, which is most likely due to the fact that the series folded after one season. So, I’m not saying that this is some form of replica — which it clearly isn’t — but rather its a nod to the Mustang in that TV series. It just seems to coincidental that the ’07 Ford Mustang was chosen as the “Knight”, to not be. 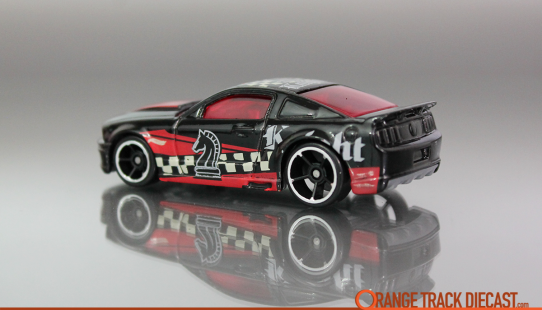 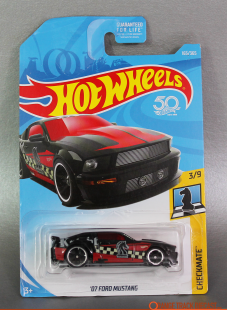 This black variant of the #’07 Ford Mustang is the first colorway of its 2018 Checkmate release — just like the first colorway for the other eight cars in this series. I mentioned earlier that you can pretty much assume there will be a white variant of this #Mustang showing up, and given that we have seen all the way up to the #2018 Hot Wheels “J” case assortment, it will have to appear somewhere from “K” to “Q”. For now, we just have the “black knight” ’07 Ford Mustang. Its hitting retail now as part of the 2018 Hot Wheels “G” case assortments. If you are deciding to go the “make your own Hot Wheels chess set route”, make sure you are picking up the allotments (listed above) for each of these ingenious releases from the 2018 #Checkmate series.