The #Walmart Exclusive, Hot Wheels themed assortments have been a blessing, and a curse. At the time I am writing this, I literally just got back from a late-night Walmart run and saw a whole end-cap display full of the 2nd wave of the #Camouflage Series — sans #’83 Chevy Silverado of course. As I round the corner to the pegs, I see mainline pegs that are 3/4 full of more Camouflage Series vehicles AND the dreaded Spiderman: Homecoming Series. This is why collectors are upset with Walmart; because the employees are filling the pegs with these slower moving themed assortments, which take up real estate and prevent the latest mainline cars from reaching the pegs. At this point, I can assure you that Walmart and Mattel have had several conversations about this, so hopefully they can come up with a solution soon.

On the other hand, there have been some absolutely fantastic themed assortments this year with some not-so-hidden gems. Take for instance the #Walmart Exclusive, #Lamborghini Series (2017) … seven great #Lamborghinis, and a Urus. It didn’t take collectors long to notice the return of the bright red #Lamborghini Countach which hadn’t appeared since its poorly distributed, 2011 Hot Ones release — and dating back to 1996 before that! 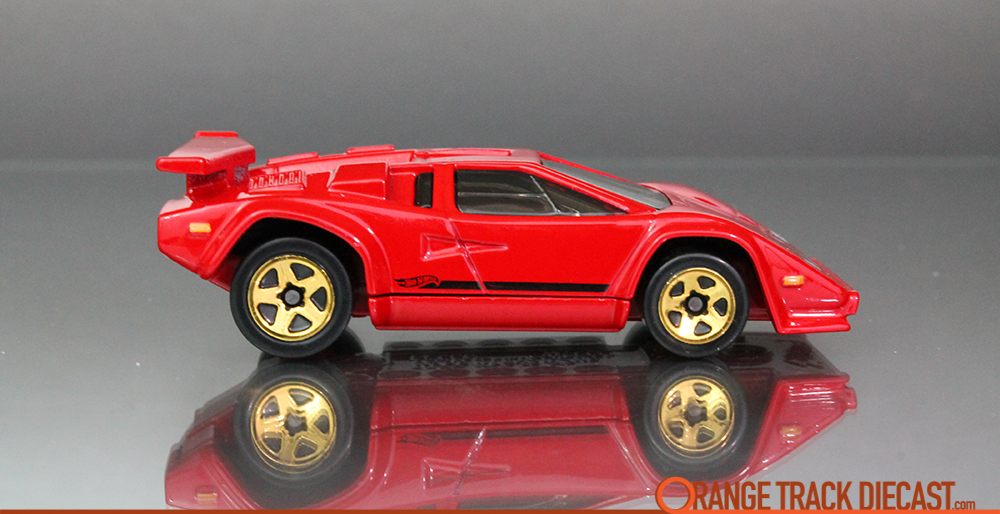 Clearly the #Lamborghini Countach was the prize of this themed assortment and for the most part, it seemed as though collectors felt the same way as there were numerous reports of collectors finding this series at retail, only to be missing #1 … the Countach. I’m not sure if it was the nostalgic factor that had collectors grabbing these, or if it was a way for some just to try and double their money, but I can tell you why I pursued it. Beyond the nostalgic factor for me, the fact that this release has a metal base AND a metal body at the $1 price point was an added value for me.

Of course, as a kid that grew up with this casting in the late ’80s, the nostalgic factor was the main selling point for me — since I never found the Hot Ones release. The #Lamborghini Countach takes me back to a time when my brother and I used to race our #Exotics — his Countach versus my #Jaguar XJ220. The Countach was never really a great track car as it was often too wide for the orange track … sorry Matt!

The Hot Wheels #Lamborghini Countach was originally designed by Larry Wood, and released in 1988. The casing had its “glory days” from 1988 to 1996, culminating in a nice 1996 Treasure Hunts release. Since 1996, its now been released a total of two times, 2011 and this #2017 Hot Wheels release. A third release (which is currently in the very early stages of development) seems to be picking up speed, but it won’t be this same old casting. Rather, a poll was launched on the HotWheelsCollectors.com Red Line Club forum by Hot Wheel Marketing Manager, Jimmy Liu, asking if collectors would like to see a Mercedes 300SL (with Gull Wing Doors) OR the Lamborghini Countach (with scissor doors). Given my nostalgic feel for the Countach and the fact that we have never seen scissor doors on a Hot Wheels casting before, you can assume where my vote went! Hopefully this isn’t the last of the Hot Wheels Lamborghini Countach. NOTE: Per the comments below, I have been made aware that the Hot Wheels Carabo casting (1970) had scissor doors on it. Thank you Jason & Doomus!