The Hot Wheels #Camouflage Series is back (again) at Walmart, much to the dismay of collectors. To many of them, this series clogged pegs the first time around back at the end of 2015. Now that its back again, many collectors that have been unable to find all the other hot #Walmart Exclusive series released throughout 2016 are saddened by the dump bin space its now occupying.

While these are valid concerns for a collector-centric way of thinking, often we forget about new collectors and the occasional diecast car shopper — which includes both adults and children. Across various social media channels I witnessed several new collectors excited to find this series, in addition to several who gave this series a second chance by picking up several of the vehicles they left behind last year. I have placed myself in the latter category for this one.

Since I don’t buy everything, I only bought one car from this series last year as only the ’68 Shelby GT500 appealed to me at that time. However, this year, with the absence of classic trucks from the Hot Wheels mainline, I decided to pick up the ’79 Ford Pickup from this series. It was by far the most popular vehicle from the series a year ago, as it did not last as long enough for me to pick one up after initially passing on it, AND its custom, “hunting truck” demeanor just seemed like something I wanted — for 94¢, I figured, “why not?”. 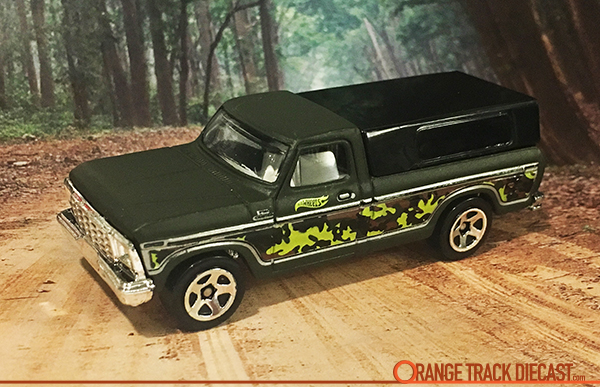 So far, I haven’t seen, nor have any variations been reported between the two runs of this series. Which is actually quite surprising considering the runs were produced a year apart, with castings like this ’79 Ford Pickup having been produced in other series. So far, the only way to figure out if your #Camouflage Series vehicle is from the first or second run is to check out the base. The vehicles from the first run should have a base code ~H29 whereas the vehicles from the second run should have a base code ~J32 — their Toy#’s remain the same.