Happy Independence Day to all my fellow Americans! Today we honor the United States with another #American Flag deco. From what I understand, there are collectors out there who have been collecting “patriotic cars”, and with previous Hot Wheels series like the #Star Spangled Series, #Stars & Stripes Series and the 4th of July Series there definitely is no shortage. One you may have missed however, is this Dodge Viper RT/10 from the 1999 World Racers 5-Pack since its not part of a specific patriotic series.

Like the other patriotic series, the #American Flag graphics are somewhat abstract. Put into a racing scheme titled, “Team BENJAMIN”, one can only assume the name is a tribute to famous forefather, Benjamin Franklin — even though the other cars in the series feature their own team names like, “BRAD LEE” and “JORDAN” and the relationship is unclear. For all we know, they all could be #Cars featuring names of Mattel Employees. Regardless, this #Dodge Viper RT/10 is a nice add to any patriotic car collection.

In addition to the great graphics on this one, the #3-Spoke Wheels always look nice on the Hot Wheels Dodge Viper RT/10 casting. This is most likely due to the fact that the real 1:1 #Viper RT/10 wore 3-spoke wheels that are incredibly similar to this set, in its first couple years of production. Additionally, this is not a #5-Pack Exclusive as many 5-Pack cars in the late 1990s and early 2000s also appeared in the Hot Wheels mainline open vamp (not tied to a segment/series). 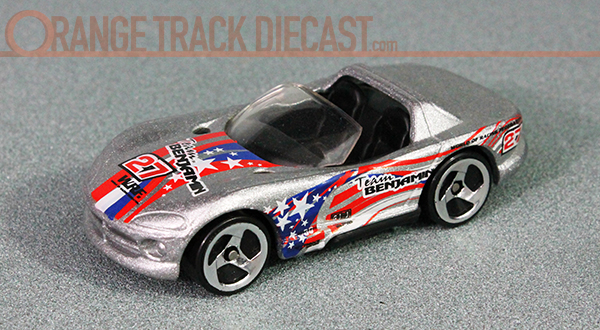