To many Hot Wheels enthusiasts, the #AcceleRacers of 2005 always played second fiddle to the series they followed up: the 2003 #Highway 35 World Race cars. The belief behind this is that the HWY35 series contained some castings that were licensed favorites; they also contained fusion graphics and Co-Mold 5-Spoke wheels, while the AcceleRacers were comprised of all #Unlicensed Hot Wheels fantasy cars with less appealing graphics. Over the last 10 years or so, the AcceleRacers have seen gains in popularity which has been evident in secondary market prices — in some cases, out-valuing the more popular HWY35 cars. While the recent gain in popularity can be attributed to a variety of reasons, it is believed that the largest gain came from kids that grew up with the series that are now buying up the cars from their childhood.

Seen by some as the successor to the Hot Wheels Mini Truck (1990-2004), the Bassline [pro-nounced “BASE-LINE”] had more of a modern styling to it thanks to GM Designer Blake Allen — former classmate of former Hot Wheels Designer, Eric Tscherne. 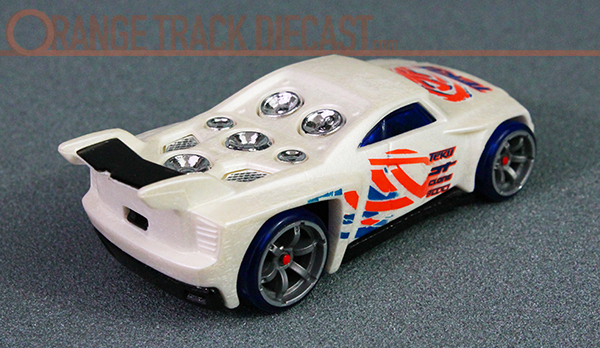 The 2005 AcceleRacers release still reigns supreme compared the other Baseline releases, however. The white pearl paint job along with the orange & blue Teku graphics (that seem Japanese inspired), really make this a classic release — being part of an animated series definitely furthers that notion. Its those blue tires on the gray #Co-Mold 6-Spoke wheels that really sets this release over the top, making it look killer racing down that famed orange track.

Hot Wheels Bassline from the 2005 AcceleRacers – TEKU (base view)

As of late, the Bassline has been mostly relegated to the Color Shifters line since it already had the line’s requirement of a plastic body and metal base. It did show up in aqua as a Multi-Pack Exclusive in 2012 and in chrome in an extremely hard to find 5-Pack called “Max Steel Urban Storm” that was only released in Brazil. NOTE: If anyone has this chrome version from the Max Steel Urban Storm 5-Pack, please use the contact form below to contact me.