While these character cars are designed with kids in mind and may seem slow moving at retail, they are still around 6 years later and available at most retail stores that sell Hot Wheels. So these have had to of been successful to some extent even though in the last couple years the characters line has been dominated by Star Wars characters.

Possibly my favorite of all the #Hot Wheels Characters would have to be the Zurg GT. Released some time in late 2010 / early 2011, the Zurg GT was in the last wave of the Toy Story assortments, so it never made it to most stores and seemed to be in short supply. I know I was mildly disappointed I never found it after seeing images of it on back of one of the blister cards. Fortunately, I was able to obtain one for a decent price, years later. These have been selling for as much as $20 so I’m glad I didn’t have to ante up that much to get one.

The Hot Wheels Zurg GT is one of the more realistic character cars out there. Its proportioned nicely and has the look of a real exotic super car. Combine that with its scarcity and its kind of easy to see why these are going for what they have been going for. In the Disney/Pixar Toy Story movie franchise, Evil Emperor Zurg is Buzz Lightyear’s arch-nemisis. He has appeared in several of the films but has never really had a significant role. Compared to all the other character cars, he has a larger role as he is one (of not many) that has transitioned to car form quite well. If you check out some of the fantasy cars in the Hot Wheels mainline, this car is right among them, if not better. Its one of those designs that just looks fast while sitting still. While there is still hope that we one day would see this re-released, I’d say the chances are slim-to-none, short of another huge Toy Story movie coming out. For now, it looks like this will be another one-and-done as it joins our #Discontinued Castings. 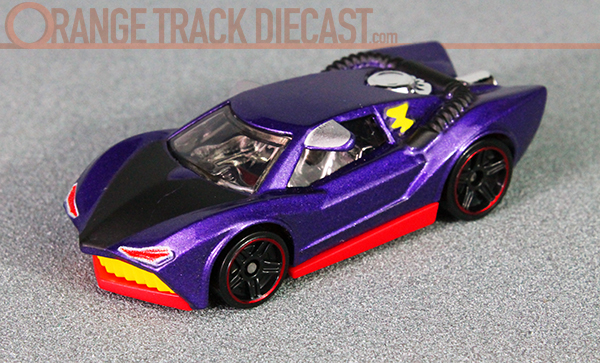