Its Opening Week and Major League Baseball (MLB) is back in full swing here in the United States, and of course, Toronto, Canada. With baseball starting and Hot Wheels always on the mind, it had me feeling a little nostalgic for the promotional Hot Wheels vehicles that were done for various MLB teams. MLB Team Promotions are definitely a thing of the past as they were done from 1998 until 2010 for 14 teams altogether. Teams like the San Diego Padres had a long standing, multi-year deal with Hot Wheels whereas my personal favorite team, the Milwaukee Brewers, only had a one-off release.

The Los Angeles Dodgers had a streak of three years (1999-2001) where they partnered with Dodge and handed out a Hot Wheels vehicle to the first “X” number of people — typically MLB promotions range from 10,000 to 20,000 units, these were unmarked. The first in that streak of three was the Dodge Viper RT/10 given out at the game at Dodger Stadium on July 3rd, 1999. While the Dodgers failed to win the ballgame that afternoon, they won in terms of this promotion. Given the partnership with Dodge, the Hot Wheels Dodge Viper RT/10 was chosen as subsequent years would see the Dodge Ram 1500 and the 2001 Dodge Intrepid Stockcar respectively.

If you’ve been following Diecast Motorsports, you would know that I’m a huge #Viper collector as I collect every Hot Wheels Viper casting. Despite being released 17 years ago, this release of the RT/10 is among my favorite even though its emblazoned with my hometown Arizona Diamondback’s biggest rival … the LA Dodgers. This is just a well executed promotional release as it does carry the Dodgers and Hot Wheels logos but also has these cool Dodger blue racing stripes, Viper badging and Pro-Circuit 5-Spoke (PC5) Wheels. Awesomely enough, if you’re a fan of this release, they are relatively easy to find online and can be yours for $7 to $10-shipped (carded). 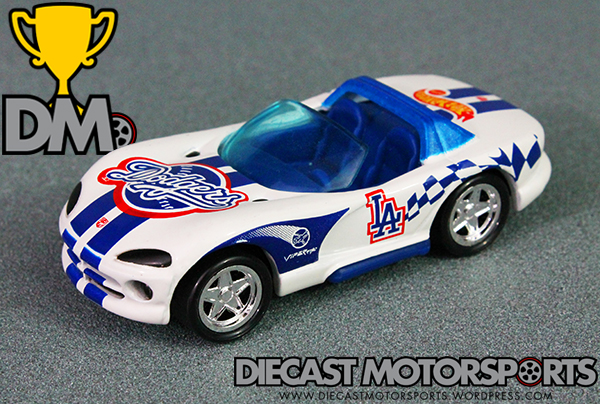