The SS Express is an interesting casting as it was designed by Phil Riehlman as if it were part of the Red Line Era Spoilers line — an early 1970s line that featured customized production cars with raked stances, spoilers and an exposed engine! While the SS Express lacks the actual spoiler on back, it has the raked-stance and exposed engine making this one mean car. This car is based off of the Hot Wheels ’70 Chevelle SS casting. While the ’70 Chevelle SS debuted in the 1999 First Editions, the SS Express didn’t roll off the assembly line until late 2007 as part of the Since ’68 line.

The level of detail on the version shown below is what truly makes the car special. Sure, its a convention car and it was limited to 10,000 pieces, but the graphics work coupled with the spectraflame paint really separates this car from even the other convention cars that were offered. The drag strip style paint job featuring retro-inspired Hot Wheels graphics is wild and crazy but does the trick. There are “REDLINE RACING ASSOCIATION” logos at the top of the front fenders, while the interior front seats are painted red. There is even a #40 graphic above the back fender (for the 40th Anniversary of Hot Wheels in 2008). The Chrome Real-Rider 5-Spoke Wheels with Red Line tires contribute to that mean stance of this vehicle. To top it off, the headlights and Chevy “Bow Tie” are painted on the front of this version. 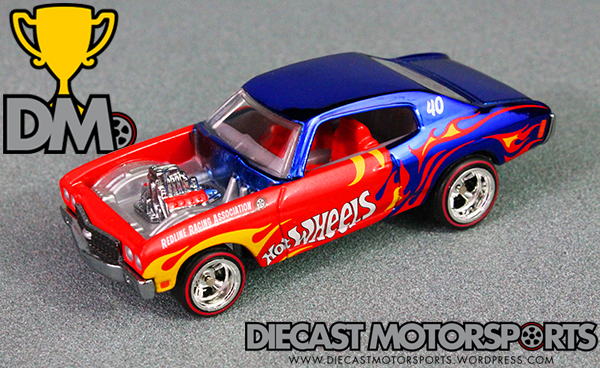