2004 was known as the year of the “Hot 100” as Hot Wheels released 100 First Editions into the Hot Wheels mainline — well, 101 if you count the mail-in bonus Volkswagen Drag Truck. Among the Hot 100 were ‘Tooned vehicles which were castings with exaggerated features. While these ‘Tooned vehicles were mostly met with disgust in the craziness of the casting splurge, there were some nice castings among them. One of (what seemed like a few) realistic castings for the year was the brand-new C6 Corvette.

This 6th generation Corvette (or “C6”) was released in only one color and that was towards the end of the year — which is around July or August for Hot Wheels. Therefore, this Larry Wood designed casting only had one colorway, but thankfully it was Corvette red. The 1:1 6th generation Corvette ran from 2005 to 2013 for Chevrolet and the most notable change from the C5 was the end of the flip-up headlights which were replaced with stationary ones.

The Hot Wheels C6 Corvette has been released quite a few times over the last 12 years. While there have been some great releases such as the Kentucky deco’d Connect Cars version, Bullrun releases and the 2006 Treasure Hunts version, none are as smooth and as iconic as this red coupe. 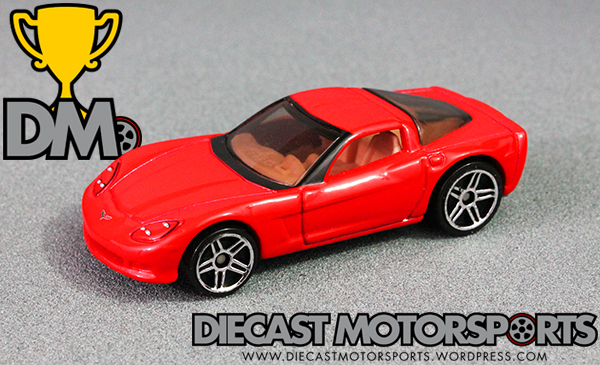