There is a lady taking Hot Wheels by storm in 2016…a “Fairlady” some will say. When Hot Wheels designer Jun Imai teased collectors with some photos of his real 1:1 1974 Nissan 260Z project car in October 2013, many of those collectors started to drool because they knew there was a good chance that we would see this car in 1:64 scale. Fast-forward to November 2015 when the 2016 HW Speed Graphics Series Nissan Fairlady Z starting showing up on the pegs to coincide with the release of the Need for Speed video game. This Z comes in metalflake deep blue and dons the authentic “KAIDO HOUSE” graphics seen in the video game (see video below).

Already a hit with #JDM collectors, this Hot Wheels Nissan Fairlady Z is likely to be a hit with players of the game as well. Destined for a premium Hot Wheels release in the future, the Fairlady Z should drive collectors crazy and obsessive in trying to obtain one in a way that similar to how the Datsun 240Z & Nissan Skyline have. Jun has been on a roll lately and his castings are adored by all types of collectors (read about more castings designed by Jun: #Jun Imai Designs). 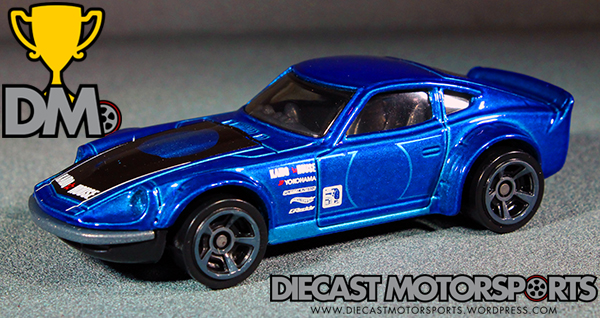 2016 has already brought us some great castings in the Hi-Roller and Cruise Bruiser, so if this is a sign of things to come, bring it on! There are two other authentic Need for Speed video game cars scheduled to be released for 2016. The Nissan Skyline GT-R (R34) will be showing up in red in the Nightburnerz Series and one that I will surely grab multiples of, the SRT Dodge Viper GTS-R in #Hot Wheels Race Team deco from the HW Race Team Series. These two are also shown in the image and video below (updated 08/30/2016).

Check out the other two cars that are part of the #NeedforSpeed mainline cars for 2016: