Another Halloween is upon us. Friends of mine, have all types of “rituals” they do. Those rituals used to consist of going to costume parties and drinking, but have now transitioned into taking the kids trick or treating and watching scary movies. Back in September my local Fry’s Food Store, a Kroger brand store, released a new series of Halloween cars but with lackluster castings and a $2.99 price-point, I did not purchase any of those this year. Instead, I am going to do my best Doc Brown impression and take you back to 2013 when I found the Hiway Hauler 2.

The 2013 batch had great vehicle graphics and even had a zombie washing the Hot Wheels Bone Shaker on the blister card. 4 of the 5 castings chosen were some of the same old Halloween castings–Gangster Grin, Fangula, Evil Twin & Rigor Motor. While I used to grab a set of the Halloween cars every year, 2013 was the first year of the Fry’s price-hike from $1 each to $2.50.

The Hiway Hauler 2 shown below was the one Halloween casting I opted to purchase–it was a new casting with an excellent paint job topped off with a cool feature. It had only been released once before (as a 2012 New Model) and that was one of the few 2012 New Models I never found on the pegs of any of my local retailers. Besides being a casting that had previously eluded me, the colors on this hauler looked great and I liked the “Halloween Horror Show” graphics on the side of the box. The cargo box itself does look a little weird being an off-white on a black and orange vehicle, BUT this is the kicker; the box GLOWS-IN-THE-DARK! Certainly not the first Hot Wheel to glow in the dark, but it was a very cool feature at the time. Put on your 8-year-old set of eyes and imagine a glow-in-the-dark vehicle going around a Hot Wheels track with the lights off! That would be a sight to see. If that sounds intriguing to you, check out the 2016 HW Glow Wheels Series hitting stores now. 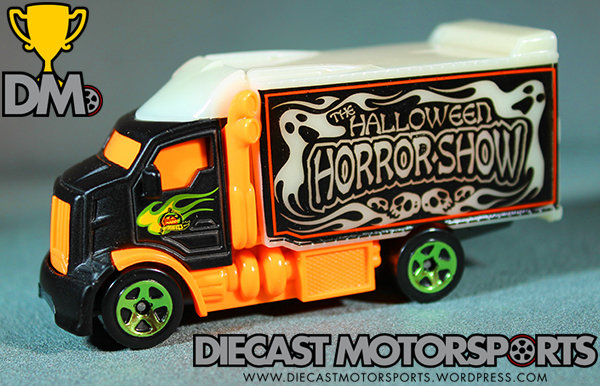