Two years later, we have been graced with several Fast & Furious renditions, two Falken Tire mainline versions and the version (shown below) which also has a Super Treasure Hunt counterpart. Since my hunting hours are very limited these days, I don’t acquire many Super Treasure Hunts. But that’s okay. In some cases, I actually like the non-TH versions more–as is the case with this one.

Having had a 1990 Toyota Celica in high school that was Toyota’s factory paint named, “Super Red”, thats what I am going to designate the color as on the version shown below. On the Supra it really pops! The graphics are very sponsored-oriented but laid out nicely, however, mine came with flakes missing right out of the packaging (see GReddy logo & the “n” in the Falken logo). While the mismatched green-chrome & yellow-chrome rims are a cool touch (as this is something you see a lot in drift cars), the lack of headlight detail is a little unsettling. Part of the Supra’s character comes from those oversized headlights with what I can only picture as late ’90s after-market Xenon lights.

In all, its hard to top the great Fast & Furious rendition of the Supra, but this is definitely a not too distant second. Look for this car on the pegs of your local retailers now! 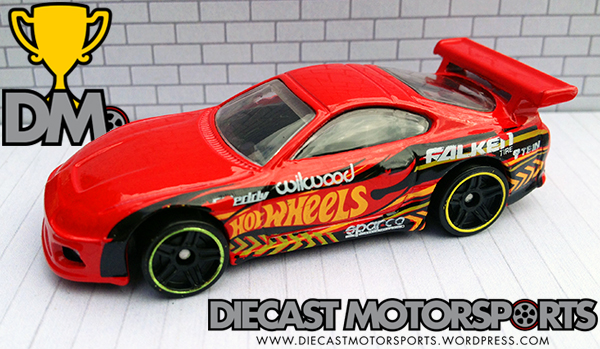