The Gasser Movement. No, we aren’t talking about the movement that existing in racing from the 1930s and into the 1950s and 1970s. We are talking about the “gasser movement” over at Hot Wheels which is in full force these days. #Gassers have been in the Hot Wheels lineup since 2001 with the First Edition of the Morris Wagon. Larry Wood eventually designed the cleverly-named, #Pass’n Gasser in 2008. But it was a trio of passenger-car gassers that eventually stole collector’s dollars faster than an unfair drag race. The #Brendan Vetuskey Designed #’65 Mercury Comet Cyclone (2011) & #’55 Chevy Bel Air Gasser (2013), and the #Larry Wood Designed #’66 Chevy Super Nova (2012) have all become collector favorites. Despite their youthful status, they have all been given the “#RLC Treatment”, with some of those releases exceeding triple digits in value.

The ’65 Mercury Comet Cyclone had 2 releases of its 2011 #Hot Wheels Garage version: “Thee Psycho Psyclone” in White with Red Top (shown below) & a Silver/Black release. It was also given the aforementioned “RLC Treatment” in 2012 wearing Spectaflame Red, and was sporting Spectrafrost Blue in 2014’s Cool Classics Lineup. 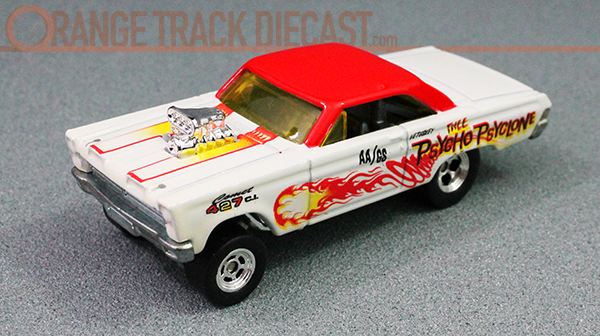