11/6/2019 — For years, the annual SEMA show in Las Vegas is the largest event of the year for the after-market car parts world. Many deals are made, brands forged, and its a huge sales opportunity for companies large and small — plus, its a great way to showcase your 1:1 build. Traditionally, Hot Wheels has dabbled in their involvement with the show, having an exclusive toy car and/or by bringing one from their 1:1 garage. Last year, that changed as the Hot Wheels brand decided that SEMA was the best place to crown their Hot Wheels Legends Tour winner. Luis Rodriguez won, and had his car, “2JETZ” immortalized as a Hot Wheels car. Check out the feature on that!

This year, the Hot Wheels brand built off their experience from a year ago — more on that in a minute. With that, they also crowned the new Hot Wheels Legends Tour Winner: “The Nash”, a Custom ’57 Nash Metropolitan that was built by best friends, Greg Salzillo and Dave Ford. The car will most likely be available at the end of 2020, as a 2021 New Model in the 2021 Hot Wheels mainline.

Greg and Dave originally brought The Nash to the El Segundo stop of the Hot Wheels Legends Tour and beat out 19 other finalists, who were all Legends Tour winners from around the US, Germany and Mexico.

The Nash is a Small Block Chevy 305. The car originally came stocked with 40hp and now touts a high-performing 300hp. The build has custom headers coming out of the fenders, old school stock steel wheels, and original bias ply tires. “We’re extremely overwhelmed, proud and excited over what Dave and I created with The Nash,” said Legends Tour Winner Greg Salzillo. “I can’t wait to see my kids’ faces when they see their dad’s car turned into a real Hot Wheels toy.” 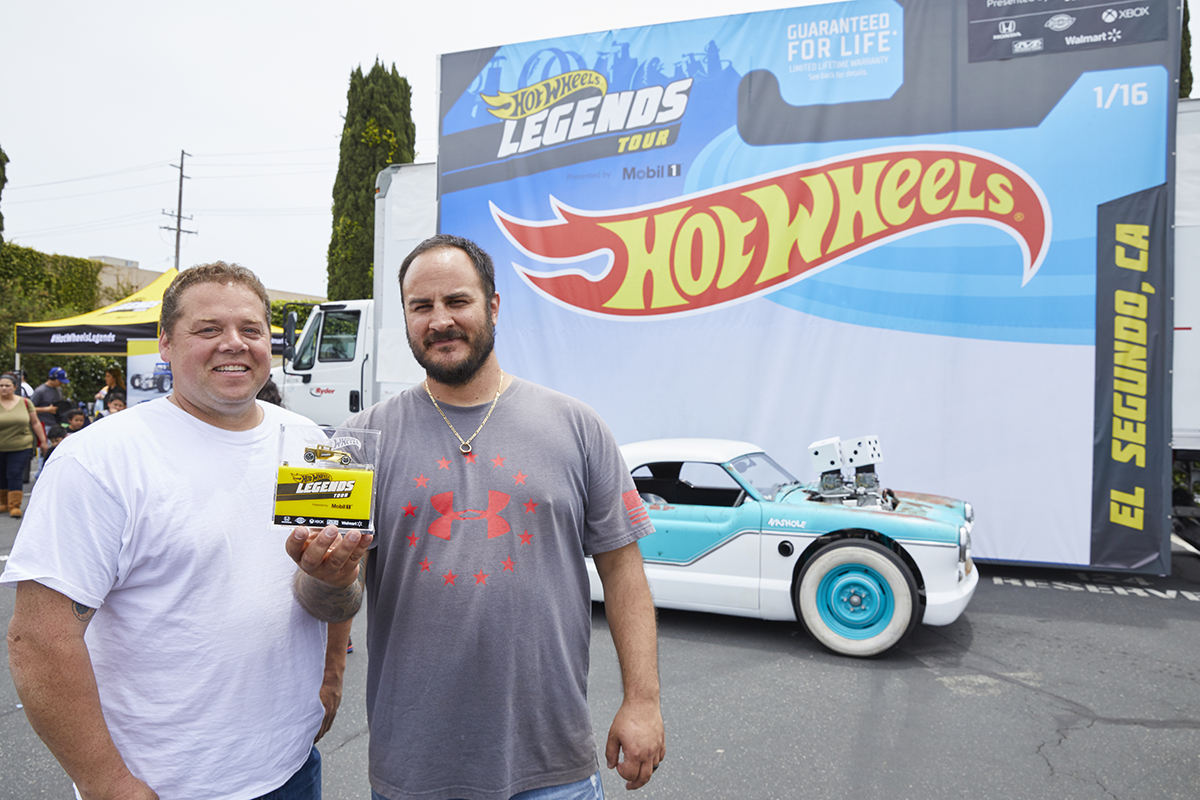 While crowning a Legends Tour Champion is certainly the pinnacle of Hot Wheels involvement at SEMA, the brand made a huge impact across the convention floor with product being handed out and unveiled at the booths of various Mattel partners.

Eibach, a company that specializes in performance suspensions, has been a Mattel partner for several years now. They had their owner’s BMW 2002 show car on display which will also be appearing in diecast form in 2020 as part of the Car Culture / Door Slammers series. Eibach reported giving away 150 pieces of the BMW 2002 on each day of the convention.

The Urban Outlaw himself, Magnus Walker was also at SEMA this year giving away Hot Wheels posters and the upcoming Urban Outlaw Mazda REPU (from the 2020 mainline) at the Mobil 1 booth. This is one of several Urban Outlaw cars being released by Hot Wheels in 2020, and will surely be coveted.

John from @thelamleygroup is walking the convention floor — as well as outside — and has already found several sites to see. Make sure you are following his experience via his instagram account.

The things you see at SEMA. The @hotwheelsdreamteam already previewed their new Silvia, and right there in the pavilion, the 1:1 by @kw_suspension! Another booth to visit, where they are handing out the Hot Wheels version of their Acura Integra. The Silvia isn’t at the booth but will be in stores soon. #thelamleygroup #hotwheels #SEMA @dmitriy_la

Former Hot Wheels Designer, Eric Tscherne (@etscherne) helped bring tuner culture to the Hot Wheels brand back in the early 2000s. HE is in attendance at SEMA and in what he describes as one of his craziest moments, he saw the nearly 20-year-old Super Street x Hot Wheels Honda Civic Si he had a hand in working on while he was with Mattel. So crazy that Honda decided to bring this one back to SEMA which totally had to be a surreal experience for Eric. You can read about the Hot Wheels version of this car — the 2001 First Editions release — now as we have already featured it here on OTD.

It’s been a blast @semashow 2019. Day one and I was overwhelmed with Jeeps, especially Gladiators!! I’m pumped to build out my wife’s now. Lots of rad cars but the craziest thing was seeing this Civic Si in the @honda booth. This thing was nearly 20yrs old and looks almost perfect! It’s a car I helped with all those years ago at Hot Wheels. Today it was the talk of the show for Honda. I was able to fill them in on some of the backstory on it. The team there had zero idea where the car came from.

SEMA is still underway, and there are promises of more to come from the list of Mattel partners that includes: Mobil 1, Honda, Dickies, Xbox, Eibach and Bisimoto. This article will be updated as the news becomes available. Be sure to check back here for all the updates!