When the Hot Wheels #C-3PO character car casting was first released in 2015, collectors scooped up any and every one they could find due to its close resemblance to the Hot Wheels #Volkswagen Drag Bus. Two years later, that demand no longer exists as these are currently hanging at most retail stores. With the releases closely resembling each other, many collectors are passing up the new release, thinking its a re-issue of the 2015 release. What a lot of collectors are failing to notice are all the differences between the two releases.

On the 2015 Hot Wheels Character Cars release, one of the #Open-Hole 5-Spoke Wheels was left chrome (versus the other three being gold-chrome) to pay tribute to his one chrome leg. Well, since The Force Awakens C-3PO now has matching gold legs, all four wheels are gold-chrome on the 2017 release. One of those updates to the character in the movie is that C-3PO now has a red arm, which was chosen to be conveyed as a red door on the 2017 release.

In addition to those differences, the 2017 release of the Hot Wheels #C-3PO has a metalflake gold painted body versus the 2015 release having more of a dull gold-chrome body. Also the wires at the top that “connect” the body to the spoiler are multi-colored on the 2017 release versus the red, blue & white wires that adorn the top of the 2015 release.

Part of why some Hot Wheels collectors are missing the updated #C-3PO is because the side the of casting that faces out towards the consumer, still looks the same to an untrained eye — even with the chrome wheel now matching the other three gold-chrome ones. The side that faces the blister card has the red door, which you can see if you look down, from the top of the bubble, when in package. 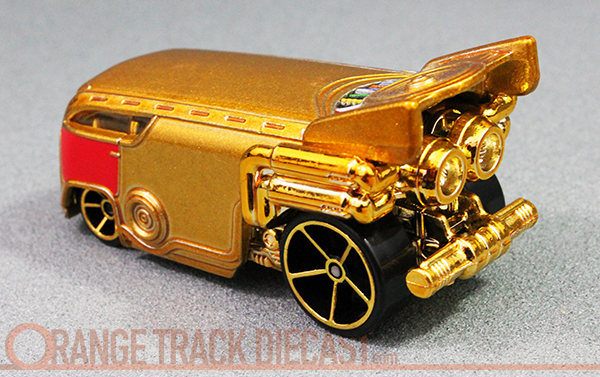 Aside from those subtle changes, not much else has changed. If you have chosen to collect this casting and opted not to get the 2017 release due to it looking a lot like the 2015 release, you may want to reconsider while its still readily available at retail.

Of course this casting looks great in the Tatooine suns… check out the @orangetrackdiecast Instagram for more creative pictures of your favorite Hot Wheels vehicles.