I have been collecting for the last 20+ years and have kind of stayed away from some of the older cars that I had as a kid. Most of it had to do with being a cardboard collector for the majority of those years, but lately (and maybe this has to do with having a child of my own) I have had a bit of nostalgia.

In October, I attended my first Hot Wheels Collectors Convention and while I was perusing room to room, looking for deals, I found a familiar face. It was Hot Wheels designer, Brendon Vetuskey — whom you may have seen on the latest Hot Wheels episode of Fast ‘n Loud. I greeted him and checked out what he was buying… several 1980s #Real Riders, with one of them being this #1986 Hot Wheels #Jeep Scrambler. Nostalgia hit me as if someone opened the flood gates and I was washed away. Suddenly, I felt the urge to obtain one to replace the one I lost (most likely) in a sandbox, many years ago. I remember it being one of my favorite Hot Wheels vehicles.

Buying a mint one on a decent blister card will cost you north of $30 today, so being the budget collector that I am, I opted to find a loose one for sale — since I was planning to open it anyways. Well, finding a loose one in near-mint condition can be quite challenging for a release that is now over 30 years old. Even in the days of super-awesome camera phones, online sellers seem to still have a hard time taking high-quality images so determining quality can be challenging.

Given that this was a common car back in 1986, there were no shortage of listings over the last several months, but trying to find a near-mint one (with photos to prove so) for under $20 was challenging. As you can imagine, patience paid off as I managed to find one for $16-shipped… but that did involve taking a gamble due to some poor quality images in the listing. Upon arrival, my first order of business was to get this shot in high-resolution, and in the setting it deserves. 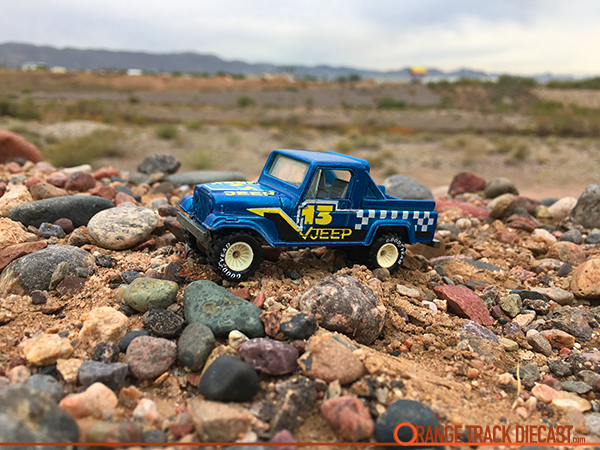 This release of the #Jeep Scrambler has one of the most magnificent metalflake blue paint jobs that I have ever seen on a Hot Wheels car… and 30 years later, it still looks brilliant. The graphics kind of have that late ’80s / early ’90s vintage look along with a big #13 and “JEEP” to give it that off-road, racing vehicle look. Lastly, were the #Real Riders wheels. These classic knobby real riders w/ Goodyear tampos on white turbine wheels always stood out to me against that aforementioned, brilliant metalflake blue paint. The thing I remember most about them was that no matter how dirty this car got in the sandbox, they always remained white when you hosed the car off — no discoloration at all! 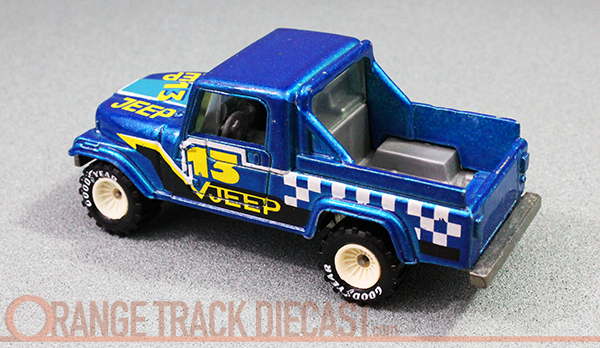 Originally introduced in 1983, the #Jeep Scrambler was released in a new color every year in the Real Riders line until 1986. The casting was initially retired in 1997 before it was revived by a re-tooling in 2009. It continues to be released today but this #1986 Hot Wheels Real Riders release was the last time it had a metal base paired with any sort of #Real Riders.

While my parents have remained in the same house for the last 24 years, I hold out hope that one day that beat-up, old Jeep Scrambler will show up and I will be able to show you all how truly “loved” that car was. Until then, enjoy this one in all its glory. 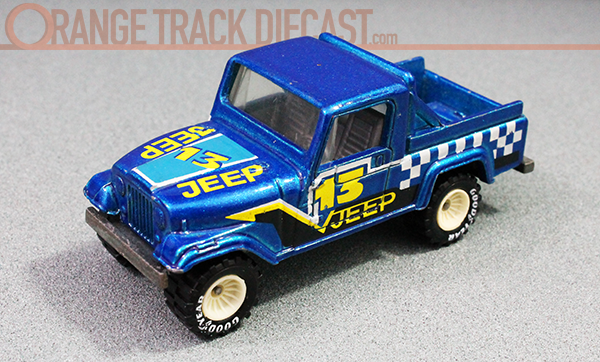 Make sure to take a peek at the @orangetrackdiecast Instagram for more creative shots of your favorite Hot Wheels vehicles.