With it being the holiday season (and officially being winter now in the northern hemisphere), those folks at Mattel really know how to bring the holiday cheer — I mean, they’re in the toy business after all. The snow has blanketed much of the country and gone are the long summer days full of convertibles and car shows. While there may not be snow in Southern California, here in Arizona or in parts of the south; growing up in the Midwest has made me appreciate the 2-car system a lot of car enthusiasts refer to as “summer cars” & “winter cars”. A couple years ago those fine Southern Californian folks at Mattel caught on and started producing those “winter cars”.

In a series known as #HW Snow Stormers, which now is in both mainline segment series & 5-pack form, vehicles feature winter/snow graphics paired with “snow” tires– which are simply white-plastic-tires oppose to the regular black.

In the upcoming 2017 “F” case assortments, the #Mini Cooper returns as the Morris Mini, featuring those white tires and a #333 rally deco, complete with a snow spray along the sides. I was fortunate to obtain this early release as these “F” case cars are just now beginning to pop up here in the United States. This #Mini will once again feature a non #Pop-Off Body as that feature was eliminated from the mainline version of this casting in 2015.

As a collector of this #Phil Riehlman designed #Mini Cooper casting, I never get sick of seeing it produced. Its lower, wide-body stance, complete with a #Rally Car-centric hood-scoop and riveted fender flares gives this 1960’s Mini the ultimate custom look. And while I yearn for this casting to one day get the ultra-premium #HWC/#RLC treatment (w/ pop-off body of course), I am also perfectly fine with this stationary-base version getting released in numerous colorways for years to come. Come spring/summer, we will have to wait and see if this #HW Snow Stormers release gets converted to a mud deco (with mud spray and brown tires) in its next colorway — should it get one. 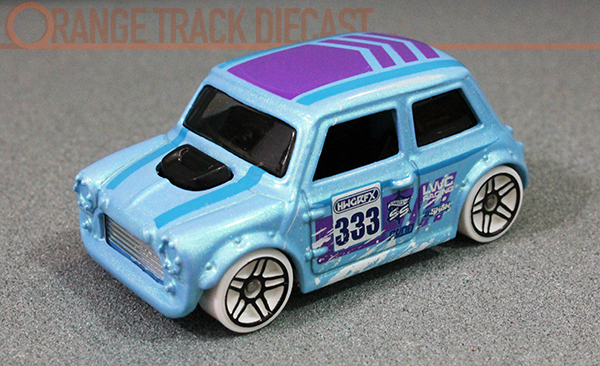