With the #Gran Turismo Series now showing up at Walgreens stores in the United States, I’ve been out looking for a few duplicates (because this series is so cool) but I’ve only seen this one left behind and its been on several accounts. While its a great looking car it can only be for a handful of reasons.

First, the Italian exotic car manufacturer doesn’t have anywhere near the name recognition and legacy of say, Ferrari or Lamborghini, but it does not mean the car is inferior in any way. I wonder if this casting is the “last kid picked” in Italy? …or if this series is even showing up there? Italian readers, please feel free to comment and let us know!

Secondly, sometimes a special release like this can often resemble a mainline release from a few years ago. The last release of the Huayra was actually in this shade of blue as it was only released two years ago in the HW Workshop / All Stars Series. It can be that collectors are recalling this release and are thinking its merely a repackaged release of that one, which Hot Wheels has done before … THAT IS NOT THE CASE!

The major giveaway is the wheels. This Gran Turismo release features blacked-out, #Muscle car 5-Spoke Wheels. But sometimes the beauty is in the simplicity and subtle details. Check out the silver “PAGANI” tampo across the back end in the photo above. Also, there is the small “Huayra” tampo on the sides just in front of the rear wheels. This badging is great! In commemoration of the 15th Anniversary of the Gran Tursimo video game, there is a white “GT 15th Anniversary” tampo angularly placed across the front fender and hood. Lastly, there is a slightly lighter blue “tribal” stripe tampo stretching from front to back across the top.

While its hard to believe anyone leaving this car behind on the pegs at their local Walgreens (for $1.09), the Huayra was one of the four cars (of the eight in the series), that came two per case. If you are still missing this one, get out to your local Walgreens and snag this beauty! 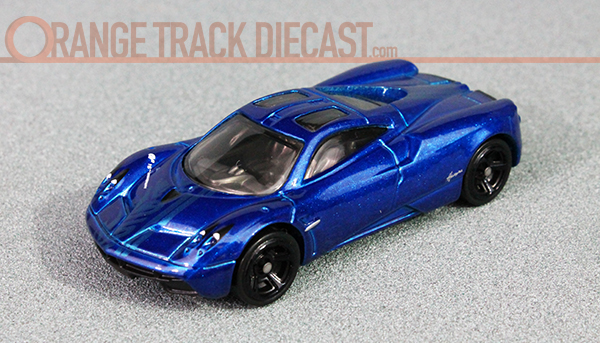