The Hot Wheels Hi-Tailer Hauler is one of those classic Hot Wheels castings that anybody who grew up in the late ’70s and early ’80s remembers. It should come of no surprise that the great Larry Wood designed this unique truck with the two motorcycles in the back. Based on the 1956 Ford F-100, the Hi-Tail Hauler casting originally debuted in the 1977 Flying Colors Series and ran for 8 years until it was last produced in 1985. It was that original nostalgia that made it so popular with modern-day collectors who repeatedly asked for it to be re-tooled as a #HWC exclusive.

On July 21, 2009, nostalgic collectors finally got their wish as this truck was sold on HotWheelsCollectors.com (HWC) as a Series 8 Neo-Classic. Hi-Tail Hauler fans rejoiced, #Ford fans rejoiced, and more importantly, #Hot Wheels fans rejoiced! The truck came out great in its #Spectraflame dark red paint over a hand-polished body. The ghosted reverse flames are a throwback to the original 1977 version as those were the same flames that version wore.

As cool and as well-received as this truck was, it was not as great of a seller as anticipated. Limited to only 6,500 pieces, the truck sat in the Hot Wheels Shop for years. This proved to be both a positive and a negative for Hi-Tail Hauler fans as they were able to pickup as many as they would like, but have to deal with that fact that its likely it will never be produced again. Its hard to believe that a classic Hot Wheels truck like this is a “re-tooled one-and-done” as the Hi-Tail Hauler joins the ranks of our #Discontinued Castings. 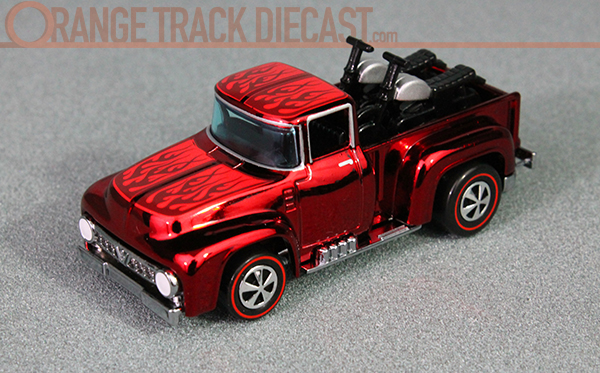