The beauty of rediscovering your collection is coming across a beauty such as this! An afterthought as part of the Cyborg City 5-Pack in 2001, this hot, little Porsche would be a great seller in today’s Hot Wheels lineup for a variety of reasons.

Hot Wheels, in recent years, has made huge strides on international fronts. Whether you believe its from internal or external promotion of the brand, the demand for these little toy cars is as high as its ever been. Domestic collectors have already begun to notice the international interest in #JDM vehicles along with European brands like #Porsche and #Ferrari.

Police graphics on licensed vehicles tend to appeal to several groups of collectors. While I can’t recall the last Porsche to wear a police deco (it may have been this one), they are few and far between. Combine that with a simple police graphic scheme and a metal body/base combo and you have a pretty solid release. I find it hard to find a car it wouldn’t look good pulling over.

It may be a little hard to comprehend that this beautiful, elegant police Porsche was released in a 5-Pack titled “Cyborg City” as it looks the furthest thing away from a futuristic cyborg city vehicle, and even after seeing the other 4 cars, its inclusion is questionable. The Cyborg City playset does not offer an explanation either. So while Hot Wheels may have decided this car may be best suited for Cyborg City, this collector is glad he has it in his collection as he envisions a realistic version of this car scaring the heck out of the drivers on the autobahn. 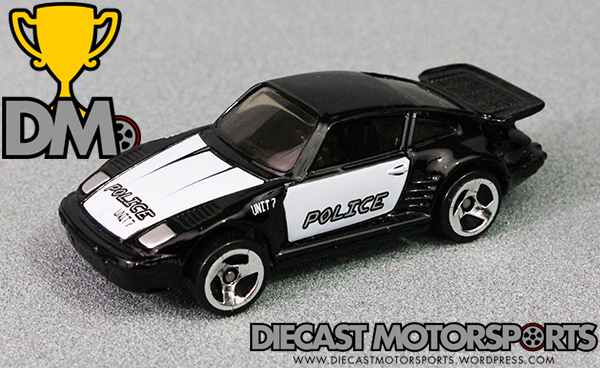