In today’s world of Hot Wheels collecting, Japanese Domestic Market (JDM) and Lifted Trucks are in. So its a little surprising that we have not seen any reemergence of the Nissan Hardbody/Truck. The Nissan Hardbody fits both designations and even falls into the classic Hot Wheels designation given its gigantic blown engine in the bed and the fact that this truck was a staple of the Hot Wheels mainline from 1988 to 2000. Given its “Hardbody” moniker, and the lack of other lifted trucks at the time, it would be surprising if kids that grew up during this time period did not know of this vehicle as it was definitely a popular one in the sandbox back in 1989!

The 1997 Blue Streak Series, Nissan Hardbody (says “Nissan Truck” on the packaging), was definitely not an easy one to find back in the summer of ’97. I remember searching all over for it only to come up empty-handed–this was two years before I could drive so I was limited to hitching a ride with my parents to the local retail stores. The only place I could find it was at a Toys R Us as part of the 1997 Series Car Collection Set–which a few had already been opened with the Nissan Truck and the Olds 442 of the Blue Streak Series taken out. Being above some of the other collectors in my area, I decided not to open the other “unopened” ones, nor could I pay the $35 or so for a set that I only needed 1 car from. So the hunt continued…

I had just attended the “Serb Hall Show” in Milwaukee (Wisc.) in September of 1997 and anyone that had this truck wanted over $10 for it. I came very close to paying the price, but as a 14-year-old kid, working as a bus boy at a local Italian restaurant making $5.15/hour, decided to just not pay the price. So there was a “hole” in my collection….ugggh. Being a 14-year-old boy that collected the cars by segment series and hanging all the segment series from that year on my bedroom wall, there really was an open space or “hole” in my collection.

The winter–a very long winter in Wisconsin–had come and gone and it was the Spring of 1998. I decided to take a long walk to check out a local Walgreens versus visiting with my aunt. To my surprise, they had stocked an older case and voila, there she was in all her Blue Streak glory! The Nissan Truck! Finally. Never found another one after that.

Fast forward to 2015, nearly 20 years later. The ease of the internet has made castings like this a whole lot easier to find as I was able to grab one from an online seller as essentially a $1 throw-in with another vehicle I was buying from him. Looking online at a few secondary sites, there is no short supply of this one, even with the JDM and lifted truck craze–albeit thats tends to be about the latest and greatest and not about older releases. Looking back, the true hunt was the reward and I’m glad that these are easily obtainable now as its a great, clean-looking truck that fits well in many places in my collection.

Last released in 2000 as part of the Attack Pack Series, the Nissan Hardbody/Truck would be a sure-fire hit if it was in one of the premium lines of today. Hopefully we will see its return one day, but for now, if you want to obtain one, you’ll have to buy one of the 1988-2000 releases. The good news is that most come cheap just like this Blue Streak treasure. 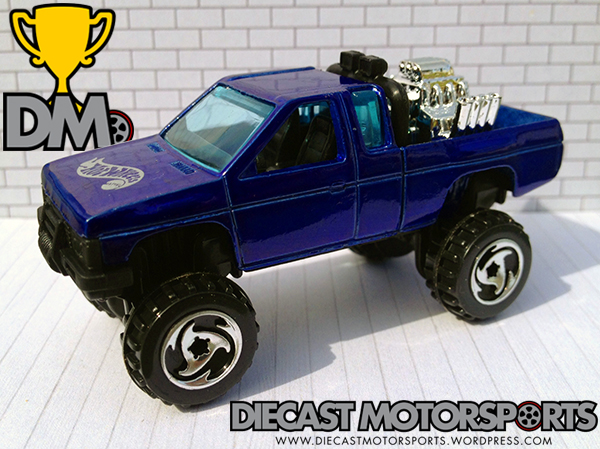