Believe it or not! A Hot Wheels oddity… SWARMULA 1

My friend Reece posted this Hot Wheels car to his Instagram (@aussiehotwheelscollector) in the wee hours of the morning today. Of course, it was Monday evening in Brisbane, Australia where his is from.

It is not everyday that I come across a Hot Wheels release I am unfamiliar with, let alone an entire casting. Hot Wheels has produced thousands of castings since 1968, so its conceivable to not recall some. In the past, they have been one-off castings from lines I don’t collect, so when I see one I have to inquire about it.

Fortunately, I was able to ask him a few questions, and he ended up writing a couple paragraphs, which he allowed for me to share with you…

This has got to be one of the strangest vehicles Hot Wheels has ever produced. It’s called the Swarmula 1 and was one of five castings to make their debut in the 1994 Color FX series, and one of three that were never seen again.

I try to have one of every Hot Wheels casting in my collection so its ugliness didn’t stop me from buying it, especially when it was only a couple of dollars. When I got it in the hand, I was surprised by how large it actually is and its smooth plastic body and relatively un-detailed base make it seem more like a McDonald’s Happy Meal toy than a proper Hot Wheels vehicle.

The name ‘Swarmula 1’ would have you imagining swarms of bees and wasps, but it seems to be more like a crocodile or alligator. Maybe Swampula 1 would have been more appropriate? Without the teeth and eyes tampos, there isn’t anything distinguishing it as a creature car rather than an oddly proportioned dragster crossed with a Formula 1 car. The concept is actually kind of cool, but the execution seems so strange and unfamiliar. 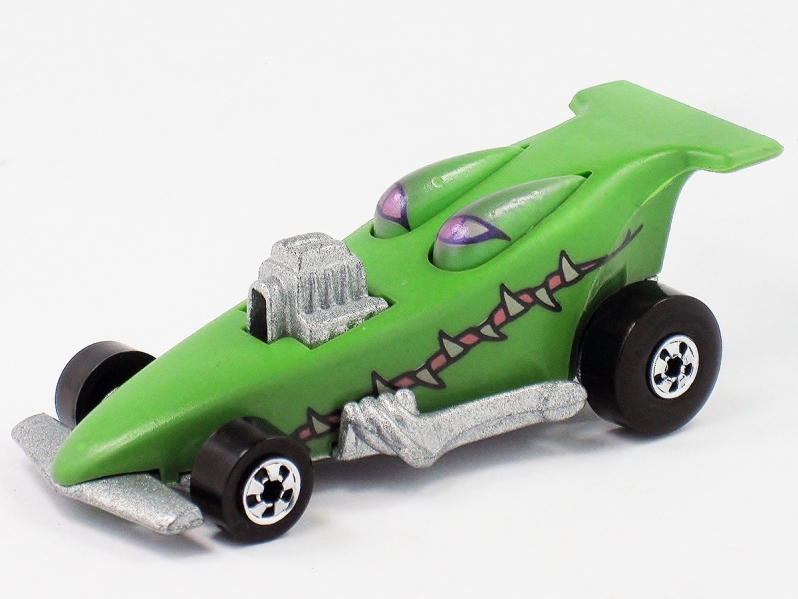 I am glad Reece covered the “Happy Meal Toy” aspect as I totally thought thats what this was at first, but then I figured it had to be one of the Color FX cars because, a) I knew there were a couple weird, “forgettable” castings from that line (see: “Sting Rod” Beetle), and b) there were some “Monster Models” that appeared in the line in the early ’90s. I am actually surprised I couldn’t recall this one as a youngster as it actually resembles a Pinewood Derby car I did a couple years earlier. Its one of many Hot Wheels #Castings that Resemble Animals.

It is weird? YES! Will I collect it? No, but it is fun to share with you Hot Wheels releases/castings that I may — or may not — have seen before. It what makes Hot Wheels collecting so fun: the diversity. So much to choose from, and the creativity is endless. So, thank you, Reece for allowing me to share!

Tagged as: Castings that Resemble Animals