In the latest mix of Redline cars from the Hot Wheels #Heritage line came the Nissan Skyline 2000GT-R which is based off of a C110 Skyline that Datsun/Nissan produced from 1972 to 1977. The GT-R run of the C110 Skyline didn’t even make it a full calendar year before Nissan halted production on it — with Nissan citing the oil crisis as the reason behind the move to more fuel-efficient economy cars.

The C110 Skyline is commonly known as the “Ken & Mary” or “Kenmeri” Skyline due to an ad campaign that depicted an American couple, Ken & Mary, frolicking around the countryside with this car in tow (see video below).

The Hot Wheels Nissan Skyline 2000GT-R was originally released in 2011 as part of the New Models Series for that year. As the #JDM crowd of collectors grew, so did the values of the Skyline. What was a common, easy-to-find car in 2011 became sought after in 2013. Nowadays, collectors are paying $10-$15 (carded/shipped) the 2011 New Models version. With the values of some of the previous releases holding steady at higher amounts, the recently-released Heritage Skyline 2000GT-R (shown below) drew lots of interest prompting the first person getting to the pegs (or case) to buy all of them to make a quick couple bucks.

I was lucky enough to find a case of Heritage / Redline Series cars on a pallet at my local Walmart. Knowing that I rarely find releases like this on the pegs, I decided to rip it open. I took both Skylines from the case and one of the Bone Shakers. Since then, I have seen this mix of the Redline Series all over town sans one car — the Skyline.

So while most are trying to make a quick couple bucks, I am enjoying the red paint with redlines (great combo by the way!) and vintage racing scheme. This is also one of only two releases of the Nissan Skyline 2000GT-R to have a metal body and metal base so some track time is definitely needed. See you on the flip side….VVVVrrrrroooooooooom! 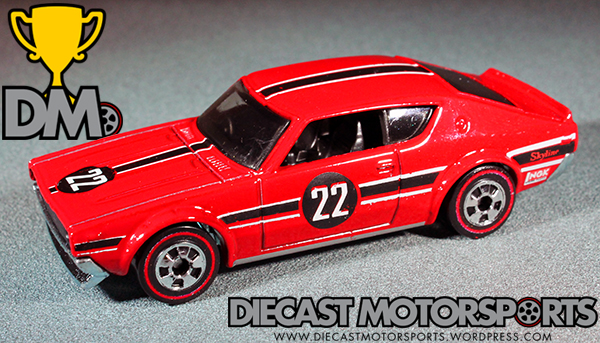