The Grand Finale of Ferrari 599XX in its Speed Machines run was a reflection of the cliché saying, “Saving the best for last!”. Its raw metal (unpainted) body is known as ZAMAC in the Hot Wheels world. ZAMAC is an acronym standing for the Zinc, Aluminum, Magnesium, And Copper alloy that die-cast cars are made from. As you can see, its rather eye-catching. It was rather unfortunate that these did not make it to the pegs in big box retail stores in the USA. As soon as I saw this version was released I scoured every known location of the Speed Machines to find one. I even searched local hobby shops and searched through foreign text on international message boards. Finally, one popped up for auction on ebay. I don’t think many people knew how truly rare these were. I was able to outbid all others and get this lovely rendition of the Ferrari 599XX for a mere $18.

The reason I say “mere” is because I compare what I paid, which seemed like overpaying at the time, to what they are going for now and it truly was a mere drop in the bucket. Currently, these have been consistently selling for over $100 topping out at $145. This collector breathes a sigh of relief he got his before the market caught on to this unicorn piece. Thank you for reading this 4-part series on the Speed Machines Ferrari 599XX. 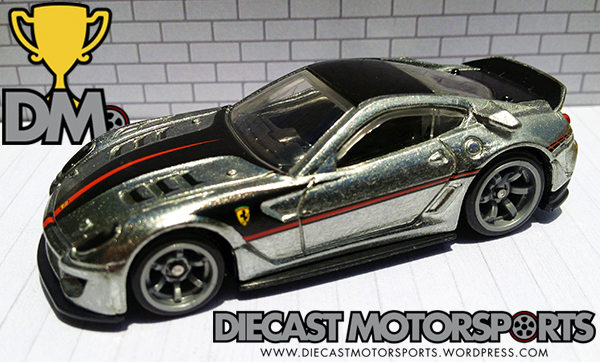